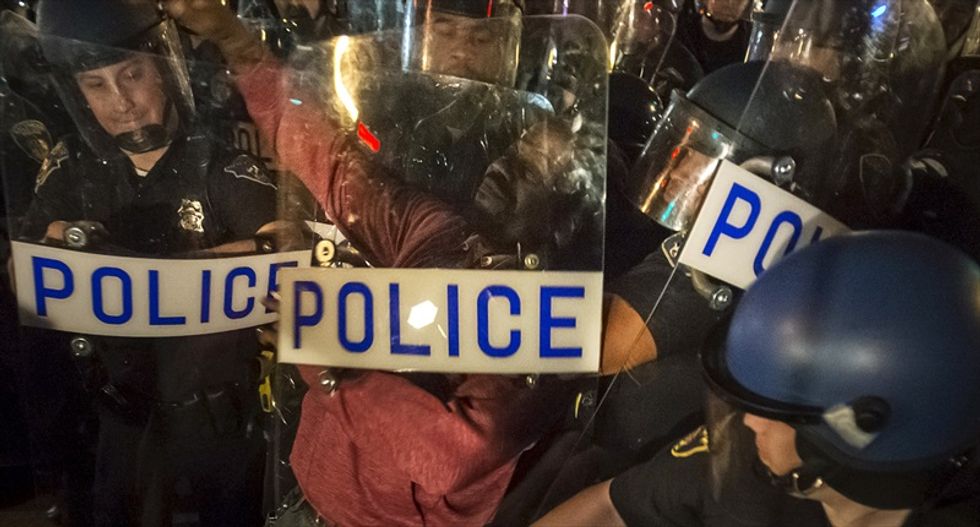 A man, protesting the death of Freddie Gray, is detained by police after defying a curfew in Baltimore, Maryland on April 30, 2015. Photo by Adrees Latif for Reuters.

Three Baltimore police officers were accused of theft in two separate investigations -- including two charged after being caught on video looting a store during the unrest that followed the death of 25-year-old Freddie Gray.

According to the Baltimore Sun, correction officers Tamika Cobb and Kendra Richard were suspended without pay after footage showed them exiting a local convenience store holding Slim Jims and Tostitos chips on April 25.

That same day, riots broke out in the city after six hours of peaceful protests calling for charges to be filed against the officers who arrested Gray earlier that month. Six officers were later charged in connection wih Gray's death.

Both Cobb and Richard were assigned to corrections facilities downtown, near the site of the unrest. They face charges of burglary and theft, and bail was set for each of them at $35,000.

"We will not allow the vast majority of our employees who are honest and hardworking to be tainted by the actions of a few," he said.

A separate sting operation led to Officer Maurice Lamar Jeffers being charged with theft of government property and "converting property of another" after allegedly stealing $3,000 that authorities left in a hotel room.

The Sun reported that Jeffers, who is part of a fugitive task force, was told to help secure the room so that Prince George's County police could execute a search warrant. He was then filmed putting the money in his pockets after his partner left the room to alert a supervisor that it was clear.

A member of Jeffers' task force reportedly told an internal affairs investigator that Jeffers cashed his paychecks instead of using a bank account, and always bought things in cash, calling the behavior "suspicious." Jeffers had in fact been accused of theft three times between 2005 and 2011.

Watch footage purportedly showing Cobb and Richard looting from the store, as posted by the Daily Mail, below.