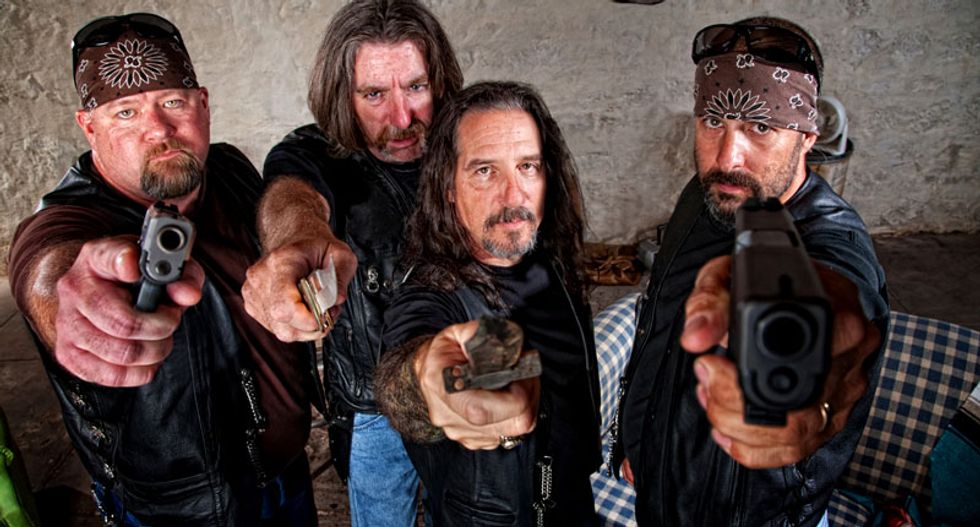 A shootout on Sunday afternoon in Waco, Texas, killed nine people, injured 18 more and resulted in authorities in the city charging 170 members of five motorcycle gangs with capital murder.

But as police worked to book and process the gang members, lawmakers in the state’s capital debated whether to further expand firearm “open carry” rights.

One bill, HB910 , passed the Texas House and was debated on Monday in a state senate committee. It would allow people to carry handguns and pistols in the open and would bar police from asking whether the person carrying the gun is licensed.

Texans can already carry so-called “ long guns ”, such as rifles, in public. Another bill, SB11 , would allow “concealed carry” of weapons on college campuses.

“Why would criminals and criminal misuse of a firearm impact a common sense issue currently in all but five states?” said Alice Tripp, the legislative coordinator for the Texas State Rifle Association, via email. Her answer to whether legislators would be affected by the deadly events in Waco: “So no.”

Police say five rival gang members began firing rounds in Sunday’s melee after a fight in a restaurant bathroom escalated. What apparently began as a brawl with fists in the Twin Peaks restaurant in Waco quickly escalated to involve knives and guns.

Waco authorities said gang members turned from firing shots at each other to shooting at police, who returned fire. Authorities recovered almost 100 weapons on the bloody floor, littered in shell casings.

But the high-profile shootout didn’t seem to faze firearms advocates. A spokesperson for the National Rifle Association said that he didn’t see a connection between Texas’s legislation and the outlaw gangs’ behavior, and said he had nothing to add to the debate.

Both state and national advocates said that similar laws, especially those allowing guns on campuses and open carry, have ramped up in the last year.

“In the state of Texas, there really aren’t any good gun laws on the books,” said Brian Malte of the Brady Campaign to Prevent Gun Violence. “And laws that they have, whether it’s concealed carry or openly carrying guns, [lawmakers in Texas] weaken and make it easier for dangerous people to carry guns in public.”

Malte used the example of Kansas, which recently did away with a permit requirement for those wishing to carry a concealed firearm. It is now one of five states that don’t require a concealed carry permit, including Alaska, Arizona, Vermont and Wyoming, according to the Law Center to Prevent Gun Violence.

In Kansas, people wishing to purchase a gun from a Walmart or any other gun shop would still need a background check, but that requirement can be avoided by purchasing a firearm from a gun show, where background checks aren’t required.

“So, now you don’t know who is a legal gun carrier or not, and now you’re going to put them out in public and hope things come out OK,” said Malte. Despite the apparent proliferation of bills to expand where and how people can concealed carry, more laws “strengthening gun regulations” were passed in 2013 and 2014, Malte said.

Many states once had far more restricted concealed carry laws, or banned the practice altogether, but such regulations have eroded over the last three decades, the Law Center to Prevent Gun Violence reports . Texas, for example, only allowed concealed carry of handguns in 1995 (during George W Bush’s first term as governor).

Now, especially in places such as Texas, gun control advocates say their work is “difficult”. Julie Gavran, a graduate student at the University of Texas at Dallas and a director for the Campaign to Keep Guns Off Campus, said: “It’s quite clear that they have an agenda, and no matter what we say or do, they’re going to do everything possible to fulfill that agenda.”

“Open carry groups can be extremely – what’s the right word here? – intimidating,” said Kristin Katz, a director for the Campaign to Keep Guns Off Campus .

In one instance, a state legislator asked that panic buttons be made available for legislative offices after he was confronted in his office by open carry advocates .

Now, some gun control advocates say they’re working to determine whether gang members were licensed concealed carry permit holders in the state, a difficult task because such information is typically not public.