Watch: Clumsy open-carry activist demonstrates the pitfalls of working out while packing an AR-15 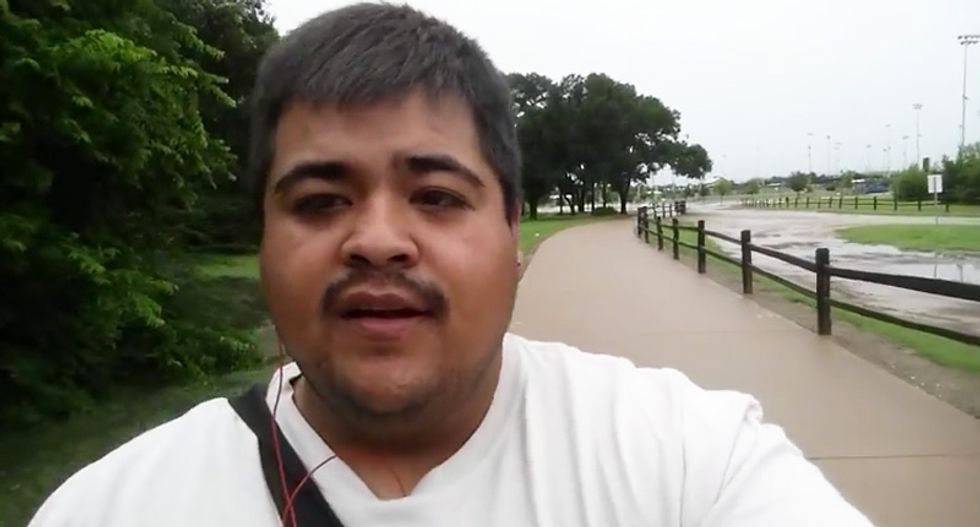 An open-carry activist from Texas inadvertently demonstrated the pitfalls of working out while carrying a n AR-15 in a video uploaded to YouTube.

Pointing either a camera or his cellphone at himself, Open Carry Texas member Eric Canales explains that he is trying to lose weight, walking six miles while carrying his AR15 strapped to his back.

"I'm getting a lot of results, feeling healthier, feeling better. I'm up to thirty pounds in six weeks, but I'm also open-carrying, see?" he explains while indicating the weapon strapped over his right shoulder.

Attempting to reinforce the point that he is armed, Canales swings the AR-15 around to the front only to get it tangled up with the cord from his ear buds as he mutters: "Oh, shit!"

Presumably -- should Canales suddenly be confronted with "a bad guy with a gun" -- the bad guy would allow him time to disentangle himself before the shooting would commence.

Watch the video below, uploaded to YouTube by EricCanales: