WATCH: Mississippi racists call woman a n****r in Walmart parking lot -- because it's a day that ends in 'day' 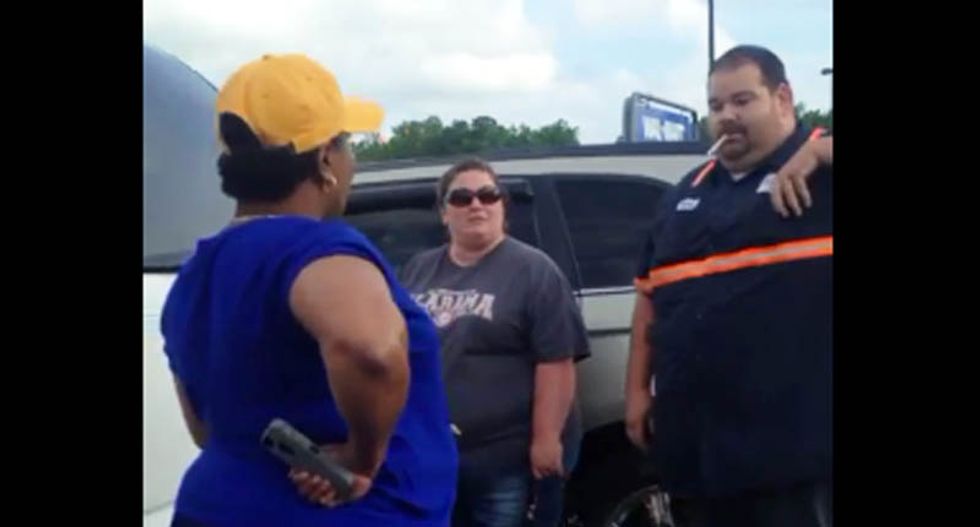 In a video uploaded to YouTube, a black woman and her daughter got into a confrontation with a white couple over their inability to access their car in a Walmart parking lot, with the man calling her a "stupid-ass f*cking n****r just trying to get someone."

With both oversized SUV's filling their parking spaces making it almost impossible for anyone to open the car doors, the argument escalated leading the black woman to call 911 as her daughter implored her, "Mom, come on."

With her daughter filming the interaction, the black woman argues with the man over the car door banging into her car as his wife looks on while smirking.

"M'am, all I wanted to see is if you left a bad mark," she tries to explain. "Y'all are making a big deal."

Turning to the man, she says, "You already got a chip on your shoulder that says I'm a n****r."

"What's the difference in me sayin' it and you sayin' it?" he asks, to which she replies "Is there something wrong with you?" before his wife jumps in with "You call yourselves that."

Calling him a "prejudiced racist motherf*cker" the man casually stands smoking a cigarette repeating, "So are you."

Turning to her daughter the woman, says, "Baby, there is something wrong with him. He's got a chip on his shoulder. He's fat and he's homely."

Watch the video below, uploaded to YouTube by D Worthington: