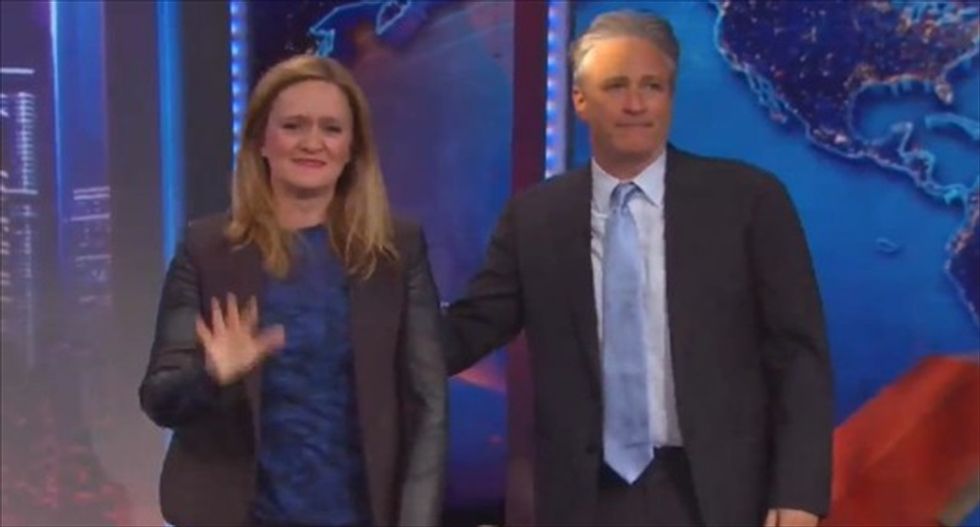 A tearful Samantha Bee got a thoughtful send-off from Daily Show host Jon Stewart on Thursday night, as the show's "Senior Senior Correspondent" wrapped up her 12-year stint on the show.

"We needed a correspondent. We looked in all the usual places -- your liquor stores, your betting parlors, your methadone clinics," Stewart said of Bee's hiring in 2003, before joking that the "nascent" Google Maps program sent the show's staff to Canada, where they discovered her.

"We found this delightful, just incredibly funny person, Sam Bee," he recalled. "So we hid her in a trunk and raced back over the border, pursued by mounties. Canada had no idea what it was losing."

Stewart then showed a retrospective of Bee's work including her run-ins with anti-abortion Republicans, young tobacco workers toiling for 12 hours a day, and conservative radio host and pastor Matt Slick, who told her during an interview that heterosexuals were under danger of being attacked by gay mobs.

"It's like you can't even go on the radio anymore and condemn a whole subset of people to hell without getting some blowback," she said.

"When you put it that way, it does sound rather arrogant and myopic, narrow-minded and bigoted" Slick conceded.

Bee will move on to serve as host and executive producer of her own comedy news show on TBS. Her farewell from The Daily Show, as posted online on Thursday, can be seen below.