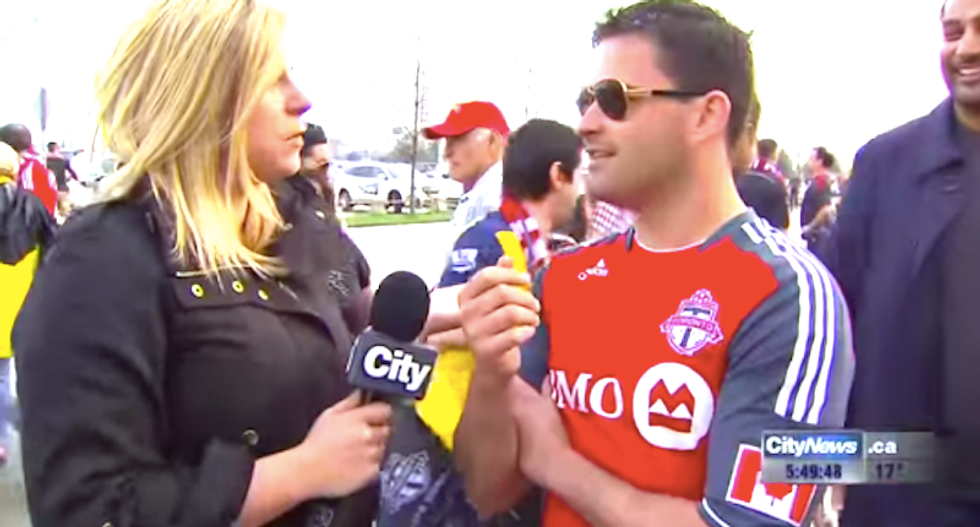 A television reporter turned the tables on a group of unruly soccer fans who tried to interrupt her live shot with a vulgar phrase.

Shauna Hunt, a reporter for Canada’s CityNews network, was trying to interview fans outside a Toronto FC professional soccer match Sunday when the apparently intoxicated men walked up to her and shouted, “F*ck her right in the p*ssy,” reported the Toronto Star.

She attempted the interview again, and another man from the group shouted the same vulgarity – an Internet trend captured in both fake and real videos – and Hunt apparently decided she’d had enough.

“Were you guys standing around waiting to ‘eff her in the pee’ me live on TV?” Hunt asked the giggling men, who admitted they had.

“Seriously? Can I ask why you would want to do something like that?” the reporter asked. “No, seriously – why? I mean, it’s a disgusting thing to say, it’s degrading to women. You would humiliate me on live TV?”

The man joked that he thought it was a “very substantial” thing to say and insisted he did not mean to personally humiliate the reporter.

“Are you actually filming this?” the man said, suddenly alarmed.

“When you talk into my microphone and say that into my camera to viewers at the station I work at, it is disrespectful and degrading to me,” Hunt said.

The second, apparently drunker man, who had been screaming obscenities, told the reporter he found the Internet prank “f*cking hilarious” – and Hunt asked him to explain why.

“It is fucking hilarious we’re not the only people – it happened in England,” the second man said.

Hunt asked the man what his mother would think if she heard him speaking to a woman like that.

“Oh, my mom would die laughing, eventually,” the man said.

Watch video of the encounter posted online by CityTV Official: