'We don't know if there are any survivors': Nepal army finds wreckage of missing US Marine chopper 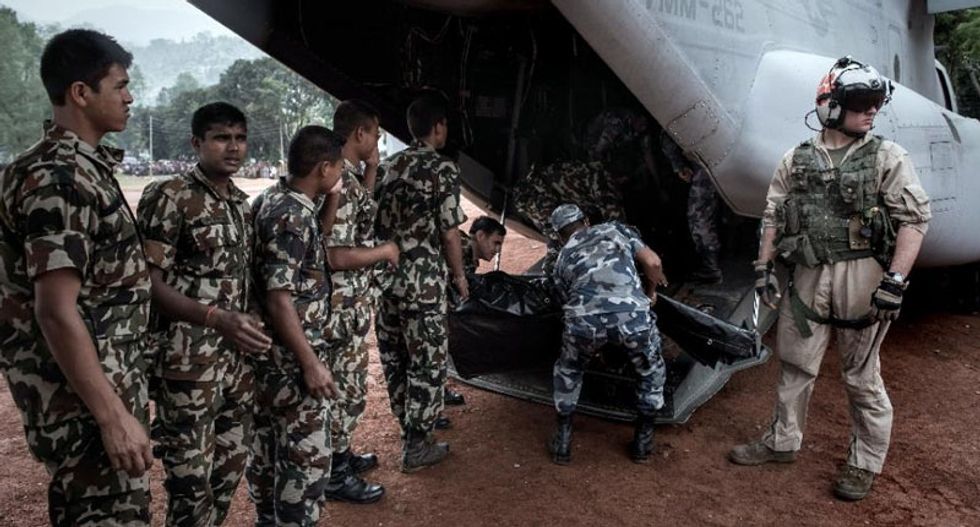 Nepalese soldiers unload relief supplies from a US Osprey aircraft at Dhading Besi on May 9, 2015 (AFP Photo/Philippe Lopez)

Nepal's army discovered Friday the wreckage of a US military helicopter that went missing with eight people on board in the earthquake-devastated country near the Chinese border, with fears of no survivors, officials said.

Major General Binoj Basnet said the helicopter, which disappeared on Tuesday while delivering aid in mountainous areas, had been located in a remote forest around 70 kilometres (40 miles) northeast of Kathmandu.

"We don't know if there are any survivors, we have yet to confirm that," Basnet told AFP by telephone.

Basnet said troops had reached the crash site on foot and two helicopters had managed land in the mountainous region after strong winds had kept them circling the wreckage.

Defence Secretary Ishwori Paudel told AFP that three charred bodies had been discovered in the wreckage but Nepal's home ministry spokesman and Basnet said they could not confirm the findings.

Army helicopters and hundreds of US and Nepalese ground troops had been deployed to scour the mountainous terrain where the US chopper disappeared on the same day that a second major earthquake hit the country.

The US military said earlier that the UH-1Y Huey was carrying six US Marines and two soldiers from the Nepalese army when it went missing during a relief flight in the mountainous east of the country.

Relief teams from around the world have been working for weeks to provide water, food, shelter and medical assistance to Nepal after the first, 7.8-magnitude quake hit on April 25.

Nearly 8,500 people have now been confirmed dead in the disaster, which destroyed more than half a million homes and left huge numbers of people without shelter with just weeks to go until the monsoon rains.

The missing helicopter was among more than a dozen US military aircraft devoted to aid operations, including two other Huey choppers and four tilt-rotor Ospreys as well as cargo planes.

Before it went missing, there was "some chatter about a fuel problem" on the radio from the helicopter crew, Pentagon spokesman Colonel Steven Warren said on Tuesday.

The United Nations has said it faces a "monumental challenge" to bring relief to victims, many of whom live in areas accessible only on foot or by helicopter.

The Nepalese government has said it was overwhelmed by the scale of the April 25 disaster, the deadliest earthquake to hit the country in more than 80 years.

The challenge was compounded by Tuesday's quake, which was centred in the remote eastern district of Dolakha and triggered multiple landslides.

The death toll from that quake rose to 117 overnight, but a Dolakha government official said bodies were still being retrieved from under the debris on Friday.

"We have been struggling to reach certain places because of road blockages and disruptions to communications," assistant chief district officer Aaulakh Bahadur Ale told AFP by telephone.

"Over 200,000 people are homeless here, we are working to provide alternative accommodation for them.