Why the North won: A look back at the Confederacy’s disastrous guerrilla war 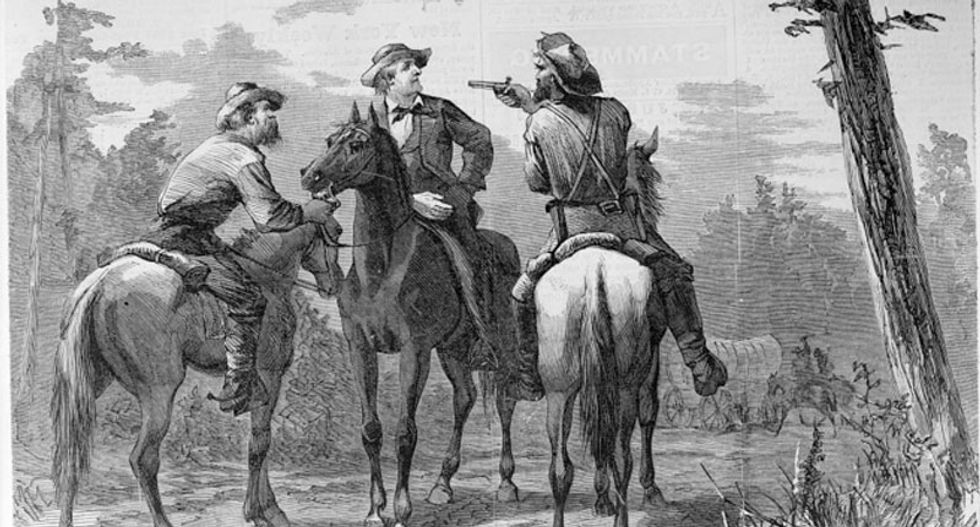 As the 150th commemoration of the end of the American Civil War draws to a close, it is worth considering why the North won.

A logical answer would be that numerically superior Union armies triumphed in most of the big battles and inflicted the higher casualties. After all, Shiloh, Antietam, Gettysburg, Chattanooga and Atlanta loom large in historical memory.

But that may be too logical an answer, and the gods of war are rarely logical.

It could be argued just as easily, as indeed my research has highlighted, that the Confederates lost through miscalculation, and that their gravest error was to wage not only a failed conventional war, but also a dysfunctional guerrilla campaign.

Why be a guerrilla?

Tens of thousands of rabid Confederates wanted to fight as guerrillas – and at least 30,000 of them (a conservative estimate) ended up doing so.

No need to wait for armies to be recruited, armed, and trained. No need to endure the tedious drill and routine or restrictive regulations of military life. Simply grab a musket, hatchet or Bowie knife; then pounce.

Was that not, these enthusiasts asked, how such Revolutionary southern patriots as Frances Marion, the “Swamp Fox,” defeated the British? Was that not how generations of southerners had defended their homesteads against marauding Indians? For people who prided themselves on their talents as woodsmen, marksmen and horsemen, it was a natural way to fight. 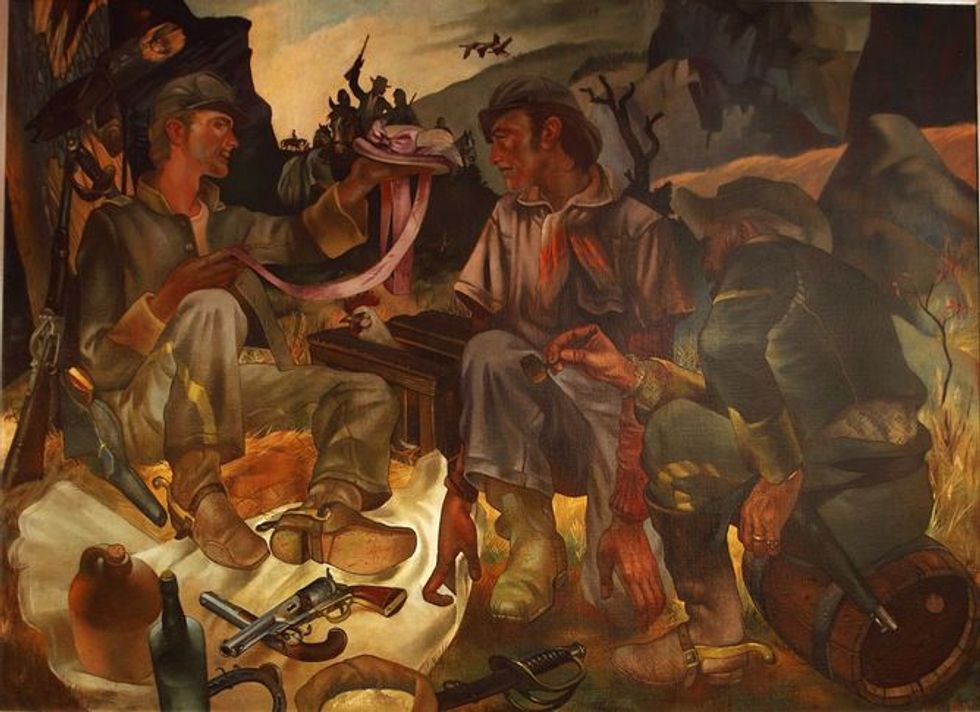 Not a few rebels also regarded guerrilla warfare as a necessity, and for two reasons.

First, in the opening months of conflict, the Confederacy did not have enough conventional soldiers to confront the Federals everywhere necessary. The earliest comparative numbers show nearly 530,000 Union troops in the field by the end of 1861, compared to 260,000 Confederates. This 2:1 ratio would continue throughout the war.

This was especially true in the border slave states of Missouri, Kentucky and Maryland, which had remained in the Union. Only sabotage, ambushes and constant harassment could hope to disrupt, or at least slow, the Union war machine in those places.

Equally important, Confederates believed that irregular bands were the only way to defend their property and families against neighboring Unionists, many of whom had formed their own guerrilla companies, although in smaller numbers.

Consequently, communities that never saw columns of marching soldiers or heard the boom of cannons became embroiled in bitter brawls.

Once again, these conflicts broke out initially in the border states, but they spread quickly to any part of the South, such as Northwest Virginia or West Tennessee, where anti-Confederates (those white southerners who opposed the Confederacy, for whatever reason, including Unionists) threatened the status quo.

As Union armies moved ever deeper into the South, emboldened local Unionists who had earlier hesitated for safety’s sake to resist rebel rule now felt confident enough to take up arms.

In other words, the Confederate guerrilla war, rather than being part of an integrated or coordinated military strategy, was simply a collection of local defensive stands against invading Union soldiers and dangerous neighbors.

Not just about the Confederacy

It is worth noting, too, that many neighborhood struggles had little to do with the causes of the war.

Rather, they could be traced back to old political, familial or personal feuds. Perhaps someone still held a grudge over the results of a close election. Perhaps this or that person had been swindled in a business deal, cheated in a card game or diddled in a horse race.

In Northwest Virginia, for example, long-time political foes faced off in rival guerrilla bands, with the pro-Union Swamp Dragoons battling the Dixie Boys, and the rebel Moccasin Rangers sworn to destroy the Snake Hunters. In North Carolina, a man was bushwhacked while plowing his field because of a family feud that began over opposition to a marriage. Oftentimes, no one was quite sure what had started the quarrel, only that people had “grudges against some neighbor,” as a Southwest Virginia woman recalled.

The shadows of war provided an opportunity for aggrieved parties to seek revenge. In any event, the essence of these conflicts was defense of hearth and home. They were civil wars, social wars, wars for survival, but not conscious efforts to preserve the Union or win Confederate independence.

All this posed a dilemma for the Confederate government, which, despite the potential danger of these internal divisions, appreciated the usefulness of independent guerrilla bands willing to confront the Union army.

Just weeks after the start of the war, the governor of Virginia and his chief military advisor agreed that where the “organized forces” of the army proved inadequate, they would rely on “the bold hearts and strong arms of a united people, to make each house a citadel, and every rock and tree positions of defense.” A year later, General Thomas C. Hindman called on the citizens of Arkansas to attack the Union invader “day and night,” to “kill his scouts and pickets, kill his pilots and his troops on transports, cut off his wagon trains … shoot his mounted officers.”

Unfortunately, the longer the general war continued, the more often the guerrilla war became a means to suppress or punish dissenters. A captured guerrilla, tried by a military commission for murder, justified hanging his victim by saying he wanted “to see one union man shit his last dieing turd.” A gang of rebels, after plundering a Unionist home, left the husband and father lying in the road, his body riddled by bullets, “his head and face … all shot to pieces.”

As such, the guerrilla war soon spun out of control. A degree of vigilante justice often tarnished rebel actions.

Then, too, thieves and outlaws notorious in their communities, seeing a chance for plunder, claimed the mantle of either the Union or Confederacy to exploit the disorder.

A Confederate summed up the situation in early 1862 this way:

“It is an old saying … that the Devil is fond of fishing in muddy waters, and as soon as war stirred up the mud of confusion you see devils turn out in droves like avenging Wolves.”

The response of the generals - first Confederate, then Unionist

When Confederate officials finally tried to organize their guerrilla fighters into formal military units, called Partisan Rangers, and ordered them to follow army rules, regulations and directives, it was too late.

Few independent guerrilla bands were willing to sacrifice their freedom of movement or leave their communities to the mercy of the enemy. As a result, the chaos intensified and expanded.

A Missouri woman summarized the situation by lamenting in 1864, “Our country is desolate, indeed almost entirely a wilderness. Our farms are all burned up, fences gone, crops destroyed, and no one escapes the ravages of one party or the other.” At the same time, a Tennessean feared that the “protracted guerrilla war” threatened to “make one vast Missouri” of the entire South. 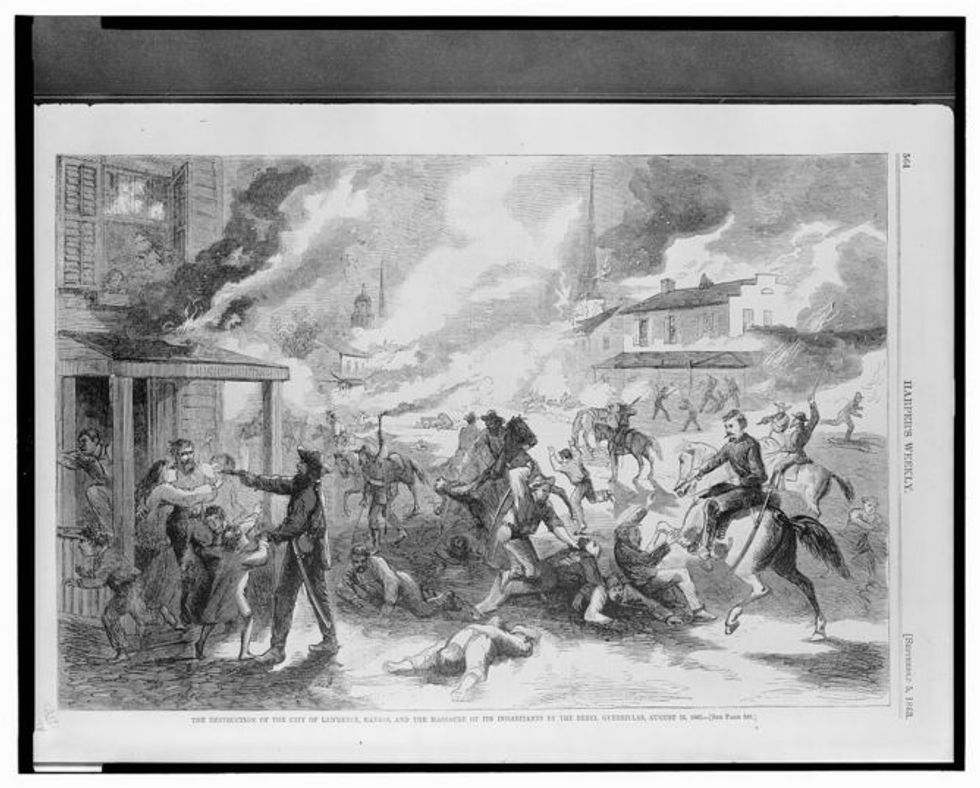 The destruction of Lawrence, Kansas by rebel guerrillas in 1863 (Library of Congress)[/caption]

At the same time, in order to protect its own soldiers and loyal citizens against this “uncivilized” brand of warfare, the US government retaliated.

Captured guerrillas, if not executed on the spot, were tried by military commissions as brigands, murderers or outlaws.

Their civilian supporters were subject to monetary fines, confiscation of property, arrest or banishment. On occasion, when the roots of treason ran too deep, plantations and entire communities were either shelled or put to the torch.

The retaliation, danger and uncertainty finally took their toll.

Noncombatants who had suffered either directly from guerrilla violence or indirectly through federal retaliation gave up trying to win the war. One Arkansas woman who had concluded that her state was hopelessly “full of bad men to burn, plunder, and rob” said that she would even welcome Union occupation, “anything for Peace and established Laws again.”

Brighter news from the conventional battlefields might have buoyed their spirits, but even that steadily declining prospect could not sustain people who had been turned out of their houses, denied the means of subsistence or numbed by the sight of unarmed neighbors being shot, hanged or tortured while plumes of smoke from burning homesteads pierced the horizon.

It did not matter that most Confederate soldiers remained confident of victory, although the army also had its share of deserters.

Too many citizens had lost the will to fight. They wished only for the return of law and order, for quietude, for the restoration of civilization: things that had been denied them by the unforgiving ferocity of a guerrilla war run amok.

Daniel E Sutherland is Distinguished Professor of History at University of Arkansas.