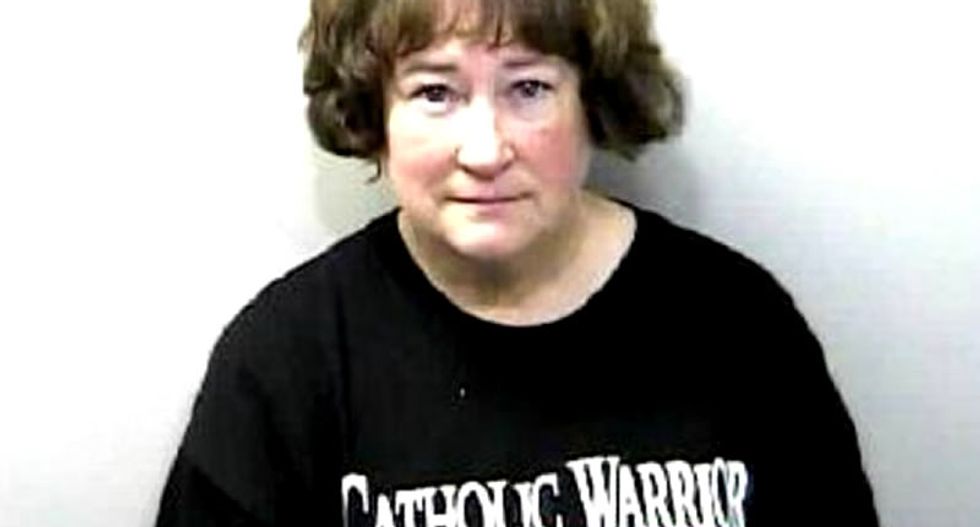 The woman who was arrested for tearing down a holiday display set up by the Satanic Temple in Florida has launched a crowdfunding campaign so that she may continue to wage her Earthly war to "keep Satan out of our Capitols and out of our schools."

Florida prosecutors dropped the charges against Susan Hemeryck after she destroyed the display containing an angel descending into a pit of fire.

According to Hemeryck, she now says she needs financial help after having lost everything in her fight.

On her GoFundMe page, under the heading "Stand Against Satan," Hemeryck writes, "I lost my home and my job because I took a stand against this evil, and I need a little help with personal living expenses. I also have a wonderful attorney, Michael Bauer, who has stood by me through all of this, and we need your help in taking the next step in our efforts to legally keep Satan out of our Capitols and out of our schools."

According to Hemeryck, the Florida display exposed children who had come "to the Capitol on Christmas Eve hoping see baby Jesus," to Satan instead, as she warned that "The Satanic Temple is also trying to place satanic books in Florida public schools and a life-size statue of Satan in Oklahoma."

"Not only is it wrong for an atheistic and/or satanic minority to attempt to impose its values upon the faithful majority, it is deadly dangerous for us to allow Satan a place in our public square," she wrote. "Our nation is already walking in darkness; once we let Satan in, unopposed, we will not be able to shut the door against the evil which follows. This is a line we cannot cross. NOT NOW, NOT EVER!!"

She also cautioned that "Satanists are threatening retaliation for next Christmas, and they are also moving forward with their agenda to entrench Satan in America's government halls and in our public schools."

GoFundMe has become a hotbed for Christians who feel they are being persecuted after supporters of an Indiana pizzeria that refused to cater gay weddings, due to their Christian faith, raised over $800,000 before shutting the campaign down.

The funding site recently shut down a campaign run by anti-gay Christian bakers in Oregon who sought to use the funds to pay for court fines. According to the crowd-sourcing site, the fundraiser violated Oregon law and was therefore in violation of the website’s Terms and Conditions. Despite the clearly stated terms of service, the bakers blamed Satan.