'You want her to die!': Hannity clashes with Islamic extremist over anti-Muslim activist Pamela Geller 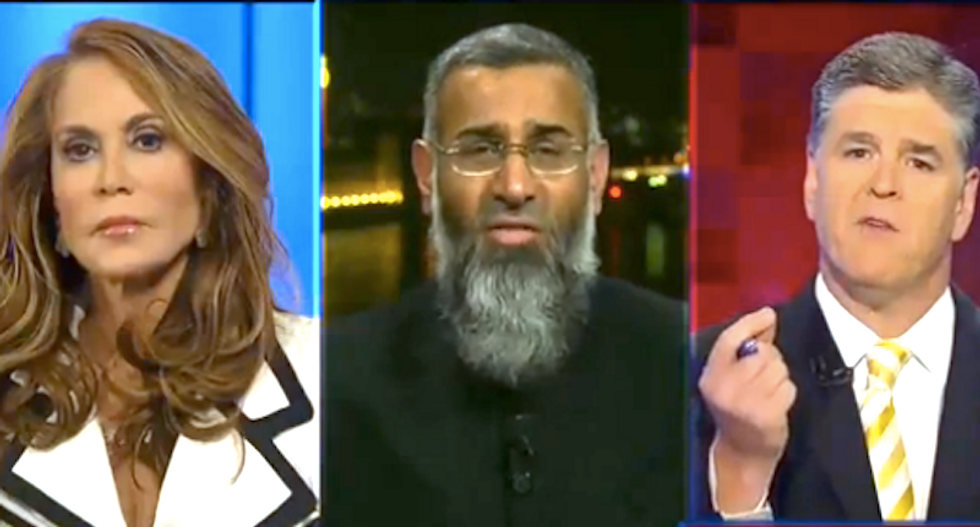 Sean Hannity and blogger Pamela Geller argued with an Islamic cleric over a cartoon contest intended to insult Muslims, which the Fox host described as a “free speech event.”

Anjem Choudary, a radical British cleric who has appeared many times on Hannity’s Fox News program, said Geller should face punishment for organizing the event, which ended with the deaths of two gunmen who opened fire and wounded a security guard.

“You’re talking about people who deliberately had a competition to insult the messenger Muhammad," said Anjem Choudary. "If you saw the cartoons that Charlie Hebdo drew, you would understand the anger.”

Online posts allegedly written by Islamic State radicals have targeted Geller for death, and the anti-Muslim activist listed other killings – including the attacks in Benghazi -- she said were linked to cartoons or other displays that offended Muslims.

Hannity asked the cleric if he felt “so frail” and “insecure” in his faith that his prophet couldn’t withstand being depicted in an insulating manner, and Choudary said he had not created the rule against blasphemy.

“You want to kill her,” Hannity said. “You want her to die.”

“She should be put before a Sharia court and tried and found guilty,” Choudary said. “Of course, she would face capital punishment.”

Hannity reminded the cleric that Geller is not a Muslim, and the cleric said that did not matter and she should have considered the consequences before offering a cash prize for cartoons depicting the Prophet Mohammed.

The segment devolved into a shouting match between the two guests and the host as they called each other evil and murderous.

Heidi Beirich, the director of the Southern Poverty Law Center's Intelligence Project, said she was disappointed that Hannity would again offer a national platform to “two well-known haters.”

“Ms. Geller and Mr. Choudary represent nothing more than an extreme political fringe,” she said in an email to Media Matters. “Their divisive behavior is made even worse by the fact that Ms. Geller is now positioning herself to be a defender of free speech, while Mr. Choudary is purporting to speak on behalf of all Muslims.”