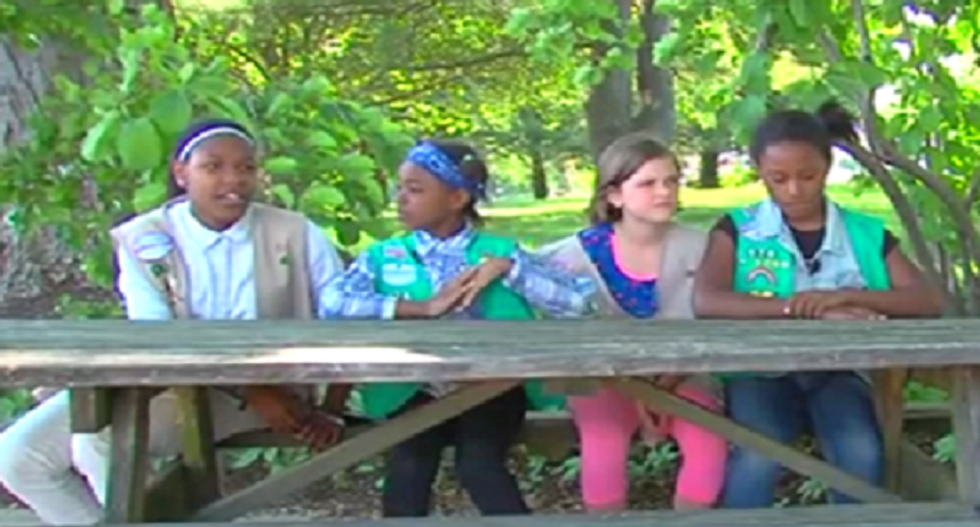 "If you didn't have anything nice to say, don't say it at all."

These words from 11-year-old Girl Scout Lily Talley could have schooled a group of grown adults caught on video taunting and making racially-tinged insults at her troop, whose members came to speak during public comment period of their local Cecil County animal control department.

The girls came to an April 29 Animal Care and Control Oversight Commission meeting after growing concerned over news reports of poor conditions and mistreatment of pets, local WMAR reports.

In a video of the incident the girls, from Chesapeake Bay Troop 176, can be seen standing outside the meeting holding home made signs, when a group of adults starts harassing them with comments like, "go back to Baltimore, where you belong."

The adults were reportedly supporters of the Cecil County's animal control vendor, A Buddy for Life.

"They were calling us, like animals and stuff," Arianna Spurlock, a 13-year-old Scout who is African American, told WMAR. "And I didn't really know why because if they are calling us animals, aren't they supposed to be helping animals?"

In the video, troop leaders can be seen trying to defend the girls, with one man saying, "You guys, no racial comments, okay. Saying that they belong in Baltimore because they're black, that is wrong. Please don't say that okay?"

The troop got very different responses from the county and from Buddy for Life.

Buddy for Life co-director Jen Callahan, who can be heard in audio of the meeting telling county officials to ignore the Scouts because they had been "coached" on what to say, sent an email to WMAR denying her people were involved with the incident.

"A Buddy for Life, Inc. cannot control the words or actions of citizens that attended that meeting," she wrote.

Cecil County executive Tari Moore reached out to the girls directly, apologizing for the behavior at the meeting and offering to meet with them and take a tour of animal care facilities. Moore has suspended upcoming Animal Care and Control Oversight Commission meetings while the county analyses the program.