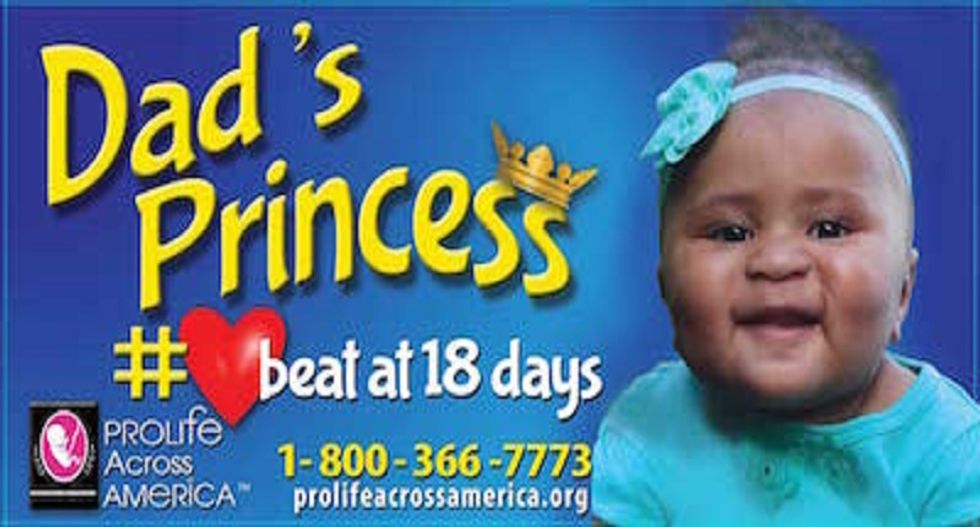 Anti-abortion billboards targeting predominantly African American communities in Atlanta have many questioning the motivations of Prolife Across America, the organization that erected them.

Protesters today called for them to be taken down, local WXIA reported. They accused the group of intruding on their community and imposing their own beliefs, disregarding the needs of women in distress.

"Just coming in and telling a community what they want or need, which is what the people who put these billboards up are doing, is not the way to go. We should bring the community together and talk about issues," Nikema Williams of Planned Parenthood told WXIA.

The billboards feature a picture of a smiling African American infant with the words "Dad's princess" emblazoned in yellow letters.

"Known as the 'billboard people', our ads are often the only sign of hope and help to those in need. The tender and touching billboard ads relay facts, change hearts and offer a 800# for help!," Prolife Across America's website reads.

When Raw Story called the 800 number on the billboards just before 10:20 a.m. Eastern, a recording answered saying "I'm sorry we're not available at this time." Callers are then given the option to leave a message or call one of several other numbers listed by the recording.

Georgia State Senator Vincent Fort wanted to know why the group spends money on billboards instead of things that could actually help women and babies in need.

"We want them to use the money, maybe to feed children. Use that money to make sure that children get healthcare," he told protesters.

Atlantans aren't the only ones up in arms about the posters, which are being called racist. The same signs have been placed in Memphis and African American residents are criticizing them for their messaging, telling Raycom News Network that it pits black men against black women.

“To use black men like me to facilitate the erasure of black women like my wife and others from the conversation about their own bodies is not only propaganda, it’s pathetic and repulsive.” Memphis Pastor Earle Fisher told Raycom.

When WXIA tried to find out how Prolife Across America decided on billboard locations, it got no answer, but reported donors can influence billboard placement.