At Faith & Freedom, up is down, black is white, oppression is "liberty" and secularism is "fundamentalism" 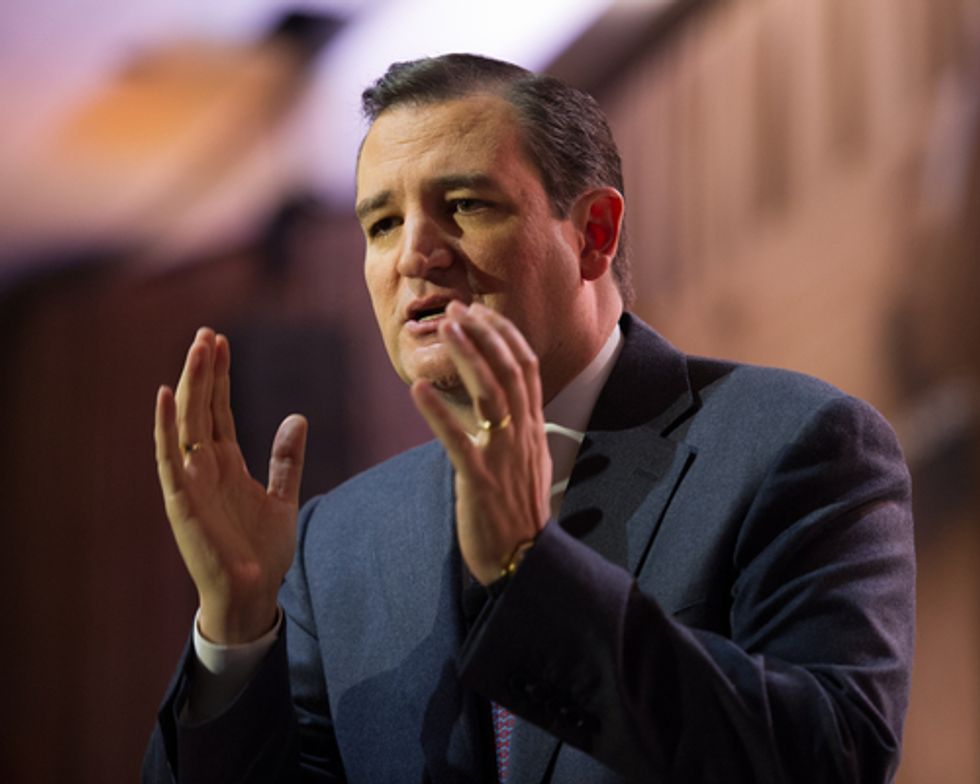 "You see, voters, war is peace, freedom is slavery, and ignorance is strength."

Over the weekend, Ralph Reed's Faith & Freedom Coalition had a "Road to Majority" event in D.C., where Republican candidates did the usual pandering to fundamentalist Christians on issues like gays and abortion. But this year also marked the year that conservative Christians have decided to go all-out on their new strategy of arguing that up is down and black is white.

At Slate, I noted that Ted Cruz's entire, house-rocking speech at the event was an exercise in trying to redefine the term "religious liberty" to mean its opposite. Cruz is basically going to use the term "religious liberty" in this way until everyone else just gives in and starts agreeing that religious liberty is a process in which the liberty to not be religious or to disagree with evangelical Christians is taken away from you. Cruz's examples of "religious liberty" were, to the last, examples of religious oppression, from theocratic gestures to establish a state religion to giving evangelical-run businesses broad power to punish the non-believers. That includes allowing business owners to oppress gay people by discriminating against them, of course, but it also includes giving your boss increasing amounts of power to dictate your personal, religious choices. That started, of course, with giving your boss a vote in what kind of contraception you use---or if you can use it at all---but we're already seeing Republicans start to redefine not just your insurance benefits but your paycheck as a "handout", which in turn will likely be used to justify giving your boss even more power to control your personal life. You know, for "religious liberty" reasons.

But it wasn't just Cruz arguing that the relentless assault on religious liberty is "religious liberty". Rabbi Daniel Lapin, last seen on Glenn Beck's show arguing that women want to be pregnant all the time and so get depressed every month on their period, also made a speech at the conference arguing that "the official state religion of secular fundamentalism" is trying to ban you from having "the sex described as ideal in God's book, the Bible". Which makes no sense, unless he's saying that the only correct way to have sex is rape, in which case, yes, I suppose the government does frown upon that. But if he means heterosexual intercourse, uh....

Sexual freedom means just that: Screw however you want, dude. (Unless it's rape, which, okay, the Bible condones or excuses in some circumstances, but the government, at least when it comes to the letter of the law, does not.) No one is going to take away your once-a-month 60 second romp under the covers with your perennially dissatisfied wife. Don't panic. Sure, we're laughing at you, but that is not the same as taking away your rights.

But wait, what does this "secular religion" also do in the haunted entrails of Lapin's bizarre mind?

"It's exactly what the Muslim hoards did when they invaded Spain in the eighth century," he railed. "They obliterated every sign of Christianity and that's what the state religion of secular fundamentalism does as it conquers our society, works at obliterating the only hope this country has, which is a fervent, revived Christianity."

Look, secularism is no more a "fundamentalism" than religious oppression is "religious liberty". This is the bizarre upside down logic of the actual fundamentalist: That because you're not allowed to tell other people how to fuck, you're somehow being oppressed. That you're not allowed to foist Christianity on the willing means that your religion is somehow being taken from you. That's not how it works. Secularism is basically the government staying out of it. It's not pro-atheist so much as it's just not anti-atheist. Secularism is about letting people believe what they want to believe without the government putting their thumb on the scale or, worse, as some fundies want, forcing their religion on the rest of us through laws meant to make us live by their religious dogma about sex, abortion, prayer, whatever.

Look, I realize Lapin's sexual fetish is telling other people what to do in bed and therefore a government that won't give him the power to do that feels like it's interfering with his deep desires. But look, asshole. The government isn't obliged to help you realize your deepest sexual fantasies. The government is obliged to give you the freedom to do so and the health care to manage your sexual health needs, but if Bob wants Mistress Fester to spank him on the weekends, the government is not obliged to offer him a dominatrix. He has to scare someone up on his own to beat him. Same story with your fetish, Lapin. If preaching at people and telling them not to fuck is what gets you hard, bully for you. Pay someone to be your audience or sweet talk some poor soul who is willing to do it for free into it. But leave the rest of us out of it. Take some fucking personal responsibility here.