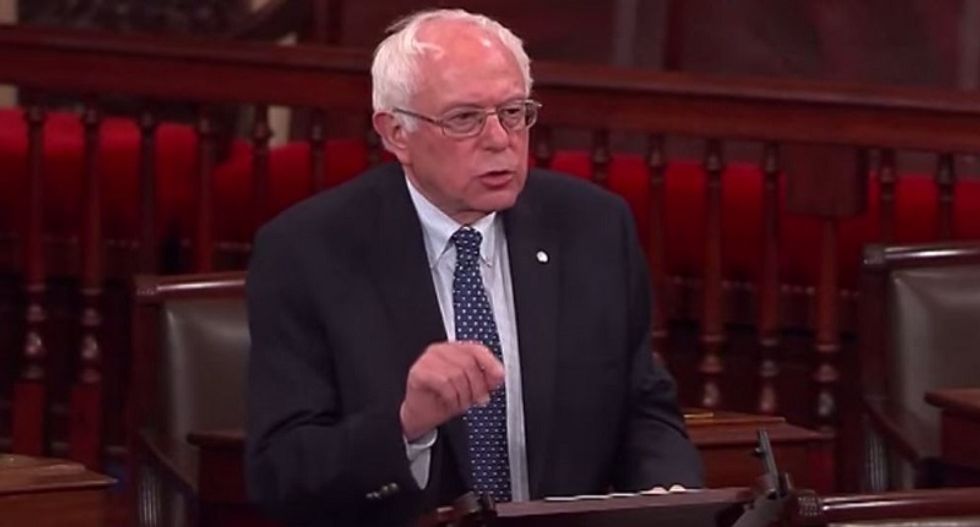 Senator Bernie Sanders took to the Senate floor on Monday to call on lawmakers to remove the Confederate flag from the South Carolina statehouse. He also voiced concerns about the growing number of racist hate groups.

His remarks were made amid discussions of removing the flag, which has flown full-staff after a racist massacred nine African Americans in historical Emanuel AME in Charleston on Wednesday. South Carolina lawmakers are set to vote on removal today.

Sanders talked about the country's history of segregation, saying:

Sixty years ago, parts of our country were part of an apartheid-type system, segregated housing, segregated schools, segregated restaurants, segregated transportation, segregated water fountains, and, in fact, an entirely segregated way of life... That flag is a relic of our Nation's stained racial history. It should come down. If any good can come of the terrible tragedy in Charleston, it is that the people of South Carolina now have the opportunity to finally turn a page on our past.

Sanders, an independent and 2016 presidential candidate, also raised the alarm about the growing number of right wing extremist groups in the US, "groups that are motivated by hatred - by hatred of African Americans, by hatred of immigrants, by hatred of Jews, by hatred of Muslims, and anyone else who is not exactly like them."

He cited the Southern Poverty Law Center, which has tracked 784 active hate groups. A survey conducted on 382 law enforcement agencies by the New York Times found that the majority of police see right-wing, domestic extremism as a bigger terrorist threat than radicalized Muslims.

Sanders spoke of progress since the time period 60 years ago when the United States had in areas of the country an "apartheid-type system," lauding the election in 2008 of Barack Obama. Like him or not, "this country was able to judge a candidate by his ideas and character and not the color of his skin."

But, he noted, the Charleston attack " reminds us how far we yet have to go in order to create a nonracist society."