Bill Maher has a message for the Republican Party: 'Eat sh*t and die' 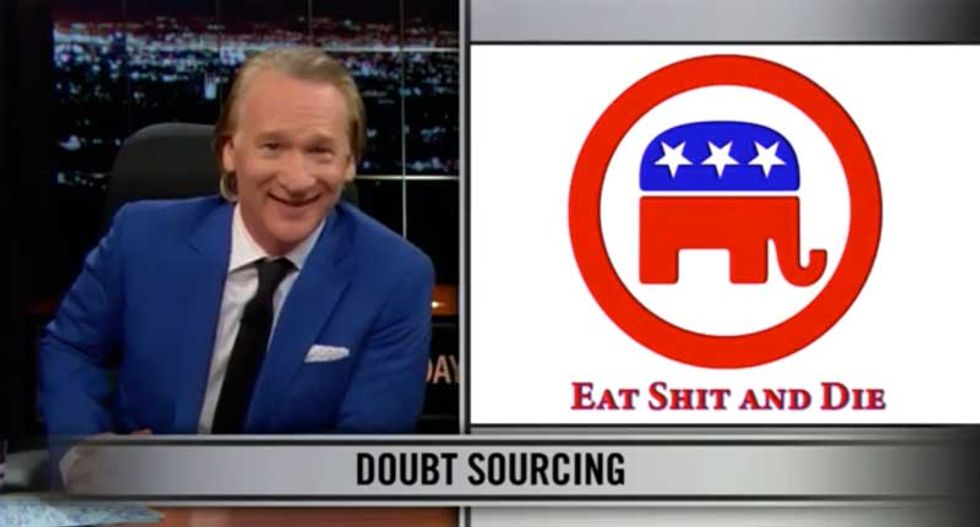 Bill Maher closed Real Time on Friday by ripping GOP lawmakers -- and Oklahoma Sen. Jim Inhofe in particular -- for their efforts to stifle not only research, but basic food labeling information.

"Remember this a*shole?" Maher said before displaying a picture of Inhofe and explaining that Inhofe threatened to convene hearings he said would counter NASA's "bias" regarding climate change research.

"Yes, we need to balance the facts with the anti-facts," Maher said sarcastically. "Because we're the United States of You Don't Wanna Know."

More recently, he explained, House Republicans started pushing for a measure that would ban meat producers from including country-of-origin information regarding their products. Maher admitted he had no idea how such a law could be phrased as a benefit to consumers.

"What do you name it, the 'Freedom From Information Act'?" he asked. "The 'Don't Worry Your Pretty Little Head About It Act'?"

If the beef lobby had its way, he said, its product labels would have nothing but a "cow with huge t*ts committing suicide," undermining the basic purpose of regulations -- to protect people from corporations, and not the other way around.

"I'm sorry, but your right to know something is always gonna be outweighed by their right to hide it from you," he argued. "Because in America, you can be armed. Just not with the facts."