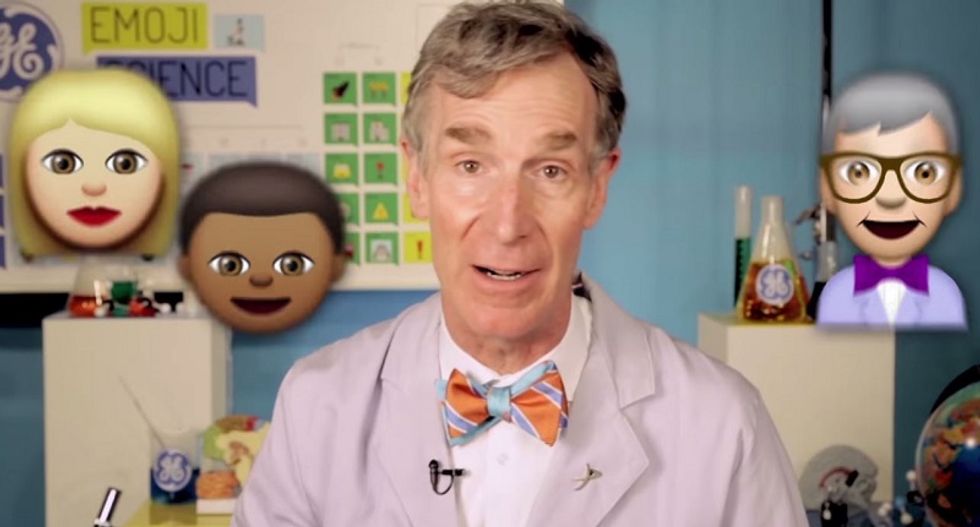 Bill Nye, also known as the Science Guy, wants people to understand climate change in an age where long-established theories like evolution are being disputed vocally by anti-science types like Ken Ham.

And what better way to illustrate complicated science in the age of smartphones than to do it with emojis?

On his YouTube channel, The Watercooler, Nye explains in less than two minutes the role of carbon dioxide (CO2) in climate change.

"Carbon dioxide's good. It holds in heat, keeps our Earth toasty and warm for us humans... It's the rate that we're changing things that's causing all this trouble."

What to do? Nye stressed the importance of expanding wind and solar energy and making it efficient.

"And then if we had a better battery or a better system of batteries, or a better scheme of electrical energy storage, we could - dare I say it? Change the world."

His commentary, though put in lighthearted terms, comes at a time when scientists this month published the results of a massive study in the journal Science Advances that found the sixth mass extinction in the world's 4.5 billion-year history is underway, PRI reports.

"Our global society has started to destroy species of other organisms at an accelerating rate, initiating a mass extinction episode unparalleled for 65 million years," the authors say.

And yet, politicians continue to deny the science behind climate change and thus have refused to do anything meaningful enough to stop it.

This situation was summed up earlier this year when Senator Jim Inhofe (R-Oklahoma) took to the Senate floor to "disprove" climate change exists by throwing a snowball at the senate president, the Washington Post reports. Inhofe is the author of a book on climate change called The Greatest Hoax.