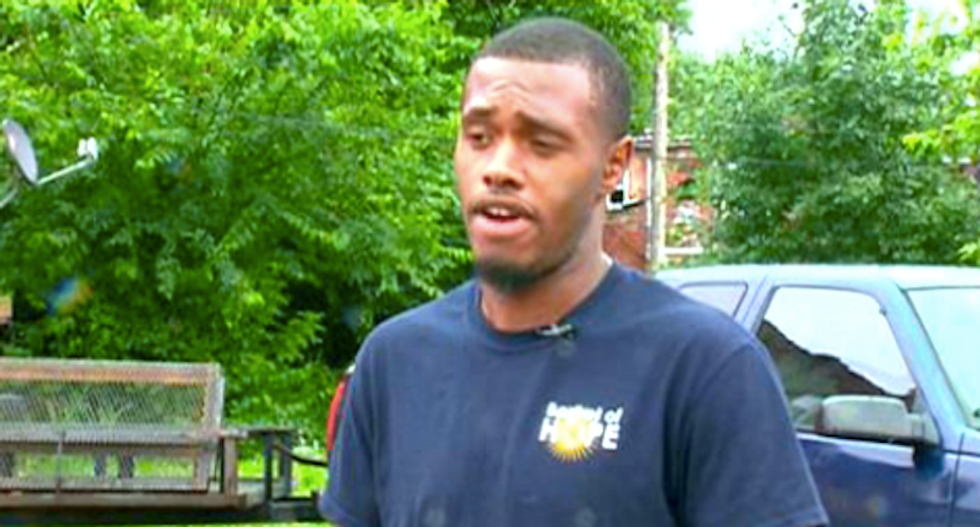 A black Missouri man said a police officer made a racial threat against him after taking him to jail over a license plate violation.

Eric Foster said he was stopped on his way to work May 22 by a Calverton Park police officer and booked into jail for failing to properly register his car, reported KMOV-TV.

"I was going down Florissant (Road) and the cop was coming to the stop sign, and all he saw was the side of my truck,” Foster said. “He looked at me and he just turned his lights on.”

The officer arrested Foster and took him to jail, where he said another officer threatened him with a gun during the booking process.

"I'm doing my paperwork, and Officer Moore's partner said, ‘How do you feel about a racist white guy cleaning his gun in front of you?'” Foster said. “(Then) he disarmed his gun and he started shuffling the bullets back.”

Foster told the TV station that he was alone with the officers in the building at the time, and he suspects they were trying to instigate a physical confrontation.

"The way they had the cuffs off of me after I got done with my stuff -- it's like they wanted me to run or do like this or something real quick so they could have a reason, I guess, to harm me,” Foster said. “I was scared.”

Calverton Park is about a mile north of Ferguson, where an officer fatally shot unarmed black teen Michael Brown last year – touching off months of protests.

Foster said he has no idea why the officers behaved as they did.

"I wasn't racist, I didn't have an attitude -- I didn't give them any type of reason to even act like that,” Foster said.

Police Chief Vince Delia initially told the station off-camera that he was not familiar with the incident, but he later said the officer told him that he took apart his gun in front of the inmate because he had been having problems with the weapon.

The chief said department policy forbids officers from carrying their weapons into the booking area, but he insisted the officer was not trying to scare Foster.

Delia said the officers would be disciplined, but he declined to specify what action would be taken.

Foster said the NAACP planned to file a formal complaint on his behalf with the U.S. Department of Justice.