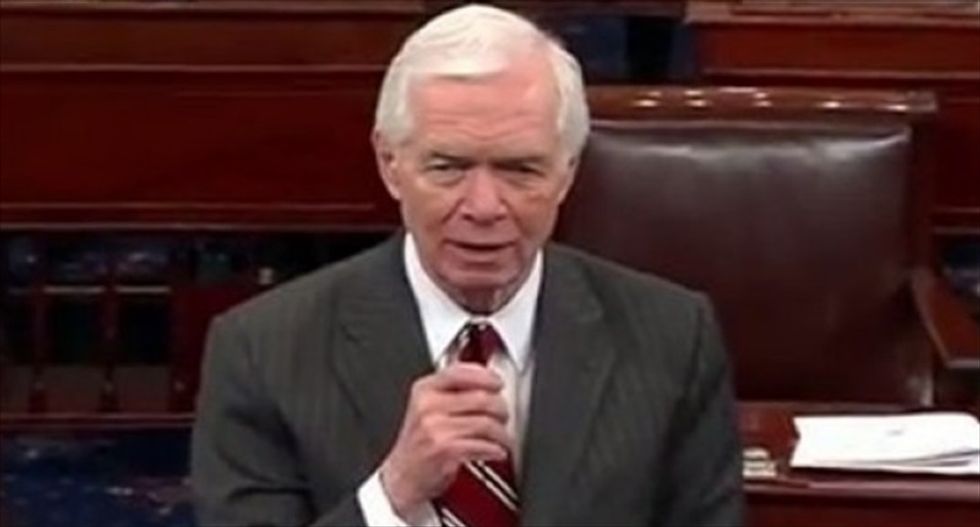 A Mississippi political blogger accused of breaking into a nursing home to videotape the ailing wife of U.S. Senator Thad Cochran pleaded guilty on Monday to conspiracy to commit burglary, according to a local district attorney.

He was accused of taking video of Rose Cochran last spring, while she was bedridden in a nursing home. Kelly briefly posted the image in an online video attacking Cochran, a Republican then locked in a primary battle with Tea Party challenger Chris McDaniel.

Kelly had been indicted on charges of conspiracy, attempted burglary and burglary, but prosecutors agreed to drop the other charges in exchange for his guilty plea.

During the first day of his trial, Kelly’s attorney argued that Kelly was acting as a journalist and therefore didn’t need consent to take the video.

Prosecutors argued that it is illegal for a reporter to break into someone’s residence to take photos.

During a court recess, Kelly decided to seek a plea deal, prosecutors said.

"I think a lot of this is political," he told the court, according to The Clarion-Ledger newspaper. "I think my constitutional rights should be respected."

Kelly was initially charged along with three other men.

A school teacher, Richard Sager, was charged with conspiracy and tampering with evidence. He is participating in a pre-trial diversion program, and will not be prosecuted if successful, The Clarion-Ledger reported.

John Mary, a former conservative radio host, in August pleaded guilty to conspiracy and was sentenced to five years of supervised probation in exchange for helping the investigation.

Attorney Mark Mayfield, a leader in the Mississippi Tea Party, was also charged with conspiracy. He committed suicide in June.

“Throughout this ordeal, we have maintained that a crime was committed,” Madison County District Attorney Michael Guest said.

Kelly will be sentenced on Monday.