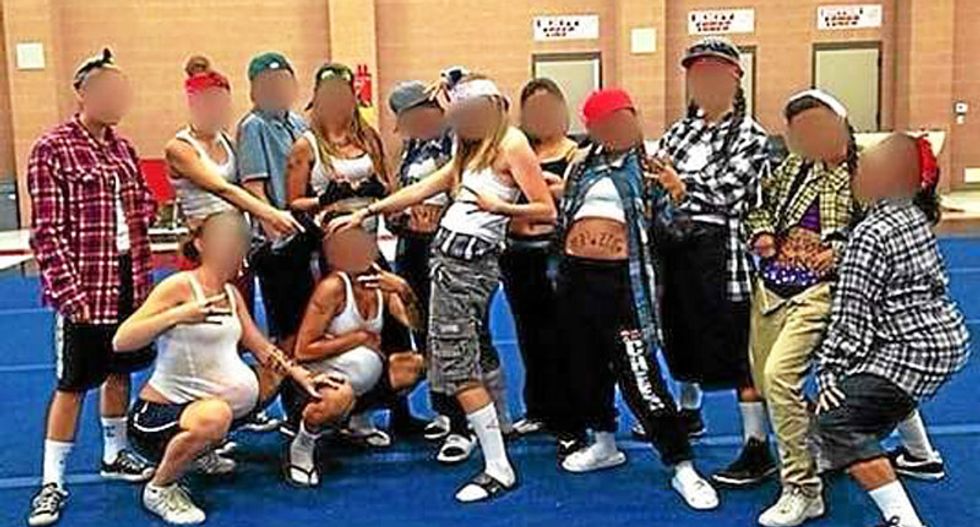 The principal at a California high school used graduation ceremonies on Friday to praise the "strength and courage" of the school's cheerleaders after they came under fire for posing as Hispanic gangbangers during Spirit Day last year.

According to the Redlands Daily Facts, Principal John Maloney praised the young women, dismissing the racist hijinks as the act of high school students.

“These are high school kids,” Maloney told the parents at the graduation ceremony held at the Redlands Bowl. “We don’t care about what is happening in Congress, but we care about a of couple cheerleaders dressing up. I admire those girls for their strength and courage.”

The occasion of the photoshoot was last year's “Gangsta Day” team-building exercise that made some school administrators uncomfortable.

Members of the cheer squad posed wearing doo-rags, flashing gang signs, with some sporting tattoos across their stomachs while others made themselves appear to be pregnant.

The cheerleading program was subsequently suspended following the controversy -- with coaches and instructors either being reassigned or terminated -- but that didn't stop the principal from heaping praise on the cheerleaders at the graduation ceremony to the annoyance of some in the crowd.

“My child went to graduation to celebrate her friend’s accomplishments and instead got a lesson in reinforcing institutional racism,” Aja Henriquez, who attended the  graduation ceremony, wrote in an email. “The principal’s comments about the racist cheerleaders simply being ‘normal high school’ behavior is the only thing she remembered about the event when she came home, along with laughter and silence that followed along racial lines in the crowd.”

In an email to parents on Saturday, Redlands Unified Superintendent Lori Rhodes attempted to squelch yet another controversy, writing, “John’s remarks focused on the concept that the students made a mistake, and that he was proud of how the school pulled together in the face of extreme media attention.”

She also noted that the young women were not prepared for the "media explosion that surrounded this event last fall."