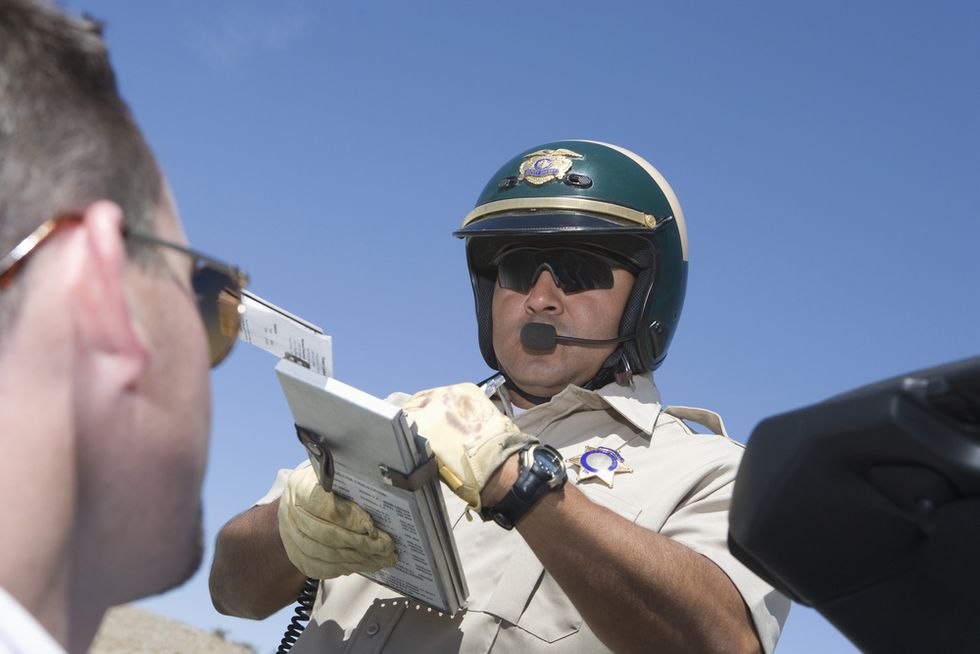 A California highway patrolman is defending himself in a false arrest case, stating that he was forced to issue uncalled-for tickets because officers are pressured by their superiors to hit a monthly quota of “enforcement contacts,” reports the Sacramento Bee.

CHP motorcycle Officer Jay Brame is being sued along with another officer and the CHP in federal court in Sacramento by Harrison Orr for civil rights violations, including elder abuse. The 78-year-old man was arrested after being pulled over for allegedly driving too slowly, making an unsafe lane change, and “drifting” during a traffic stop in 2013. The officer told Orr he suspected him of driving under the influence and put him through a series of field sobriety tests, despite the man explaining that he had problems walking in a straight line due to the after-effects of a stroke years earlier.

Despite passing the breathalyzer test, Brame arrested Orr on a DUI charge. A struggle ensued when he attempted to handcuff the motorist and a second officer, Terry Plumb, punched Orr in the stomach, knocking his feet out from under him and causing him to fall to the ground. After being cleared at a substation of being under the influence of any drugs or alcohol, Orr was booked into jail for resisting arrest with prosecutors later dropping the charges.

During testimony in the false arrest trial, Brame said that CHP officers are pressured to issue tickets and must hit a monthly quota.

The CHP denies any formal quotas are in place, but an official evaluation entered into evidence tells a different story.

“You have averaged five enforcement contacts per day for the first 15 days of the month, this is well below the shift average and not acceptable for a (motorcycle),” one evaluation stated. “You will need to pick up your enforcement activity the second half of the month and use the (motorcycle) for what it is intended to be used for.”

U.S. District Judge William B. Shubb who is overseeing the trial said he was stunned by the revelations.

“That is terrible,” Shubb said. “I would think that the CHP should be ashamed of that document.”

“You can see from the evaluations that the CHP certainly has a quota,” she explained. “The quota is 100 a month, even if they don’t encounter 100 people who are doing something wrong.”

CHP spokesman Capt. Josh Ehlers dismissed the claims, stating, “There’s not a quota in the Highway Patrol. I’ve never seen one. I’ve never enforced anything like that.”

In closing arguments in the false arrest trial, Deputy Attorney General Stephen Pass told the jury, “You hear all this about quotas and performance reviews; that doesn’t do anything, that’s just noise. It does not put anything on the scales. (Orr’s) driving is his driving. The only reason they’re bringing this up is because they’re trying to distract you.”

Orr is suing the CHP and the state for $1.25 million, alleging civil rights violations, assault and battery, negligence, elder abuse and false arrest.