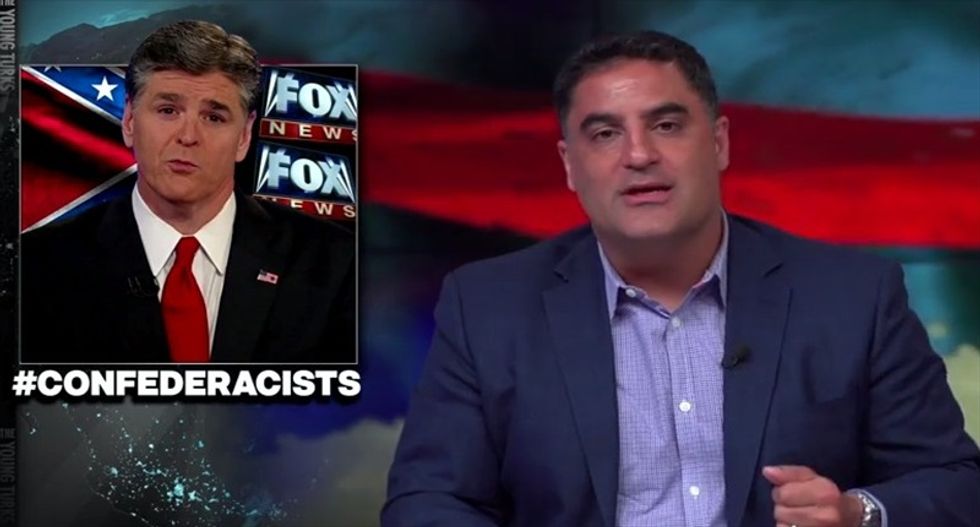 Young Turks host Cenk Uygur mocked Fox's Sean Hannity on Thursday for demanding that musical artists like Prince, Jay-Z and Beyoncé be pulled from major retailers because the same was happening to the Confederate battle flag.

"That Confederate flag represents the Confederacy that betrayed our country, that was in open rebellion, that was treasonous -- that were traitors, and did so in order to enslave people," Uygur said. "See, that might be a little different than a Prince song. But apparently, you've gotta talk slow and explain it to Sean Hannity, 'cause he can't tell the difference."

On Wednesday, Hannity accused Walmart, Sears, and online stores of holding the flag up to an unfair standard by refusing to sell it while still offering music he said was "chock-full of the 'N word,' and the 'B-word,' and the 'H-word,' and racist, misogynist, sexist anti-woman slurs none of those retail executives would be caught dead using."

What Hannity ignored, Uygur said, was the fact that music is a form of entertainment, much like movies. To demonstrate his point, the host launched into a faux-melodramatic rant calling for gangster movies like Goodfellas and The Godfather to be banned.

"Why aren't they banned? Why isn't Godfather banned on eBay?" Uygur "demanded," adding, "This Joe Pesci is running amok. He keeps beating people with a phone. I saw it -- I saw it with my own two eyes."

Watch Uygur's commentary, as aired on Thursday, below.