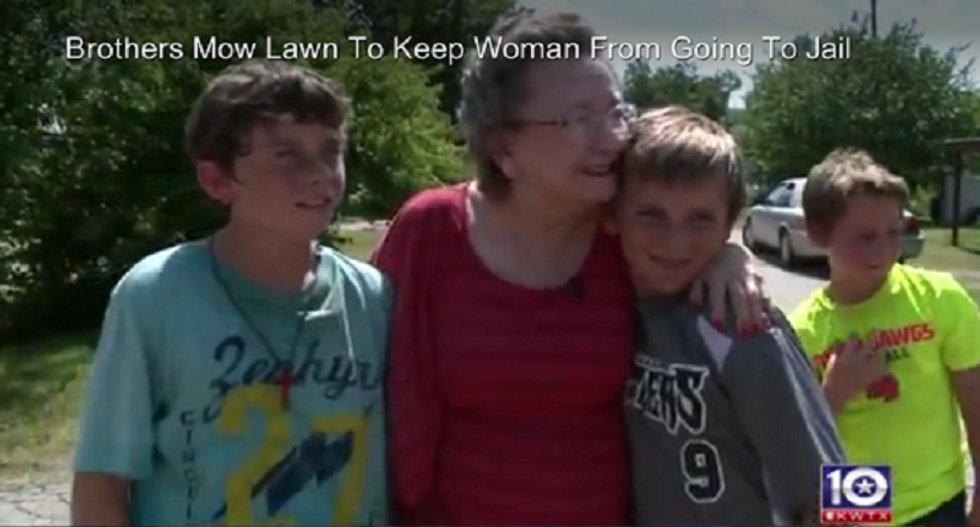 Had it not been for the help of four young brothers, a 75-year-old Texas woman could have ended up in handcuffs already. Why? Because the grass in her field was overgrown.

After seeing a news report that the city of Riesel had issued an arrest warrant for Gerry Suttle because she never received a court summons for her grass, missed her hearing and got a bench warrant, Blaine Reynolds and his brothers leaped into action in an effort to keep her out of jail.

"It's a summer day, we don't have season passes yet to Hawaiian Falls," Blaine Reynolds, one of the boys, told local station KWTX on Wednesday. What else could we do but go out and help some people."

The station reports that the boys' good deed inspired neighbors to step in and help mow Suttle's lawn. But even the neighborhood effort couldn't keep the city off the elderly woman's back.

On Thursday, she received another summons to appear before a judge concerning her lawn, the station reports.

"It is very heartbreaking to see that someone that I didn't even know came out and spent two hours in the sun doing what we thought the city wanted done and then them turn around and say 'no,'" Suttle told CBS News.

But keeping Suttle out of the grips of city officials has now become a community effort.

"I'd do it for her a second time, or a third time," Blaine Reynolds told CBS News. "Anything to keep that lady from having to go to court."

Overgrown lawns seem to be a big deal in Texas. Rick Yoes, a 58-year-old Grand Prairie resident, spent two nights in jail earlier this year over the condition of his lawn, WFAA reports.

But Suttle said she's ready to fight the city if she must. According to The Free Thought Project, she had some choice words for Riesel city officials.

"Straighten their act up. Read the state laws, before bailing off into something stupid,"