Cornel West: Australia is on the path to US-style fascism 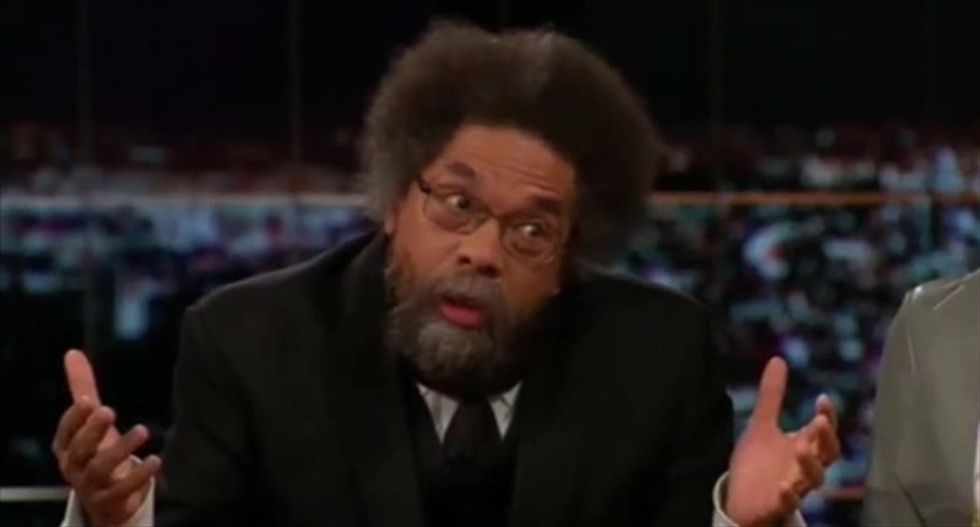 Any country that connects mass surveillance, corporations, big money and even bigger government is in trouble, says the American academic

“This is a blessing for me,” Cornel West says at the start of our interview, calling me brother, though we’ve never met. This isn’t to single me out: he calls everyone that, from David Letterman to right-wing pundit Sean Hannity .

It’s intrinsic to the black prophetic tradition he comes from and continually calls on – the American academic called his latest book Black Prophetic Fire . And the 61-year-old professor, philosopher, preacher and poet is nothing if not fiery, as evidenced by his Monday night appearance on ABC’s Q&A.

West is in Australia for a series of lectures , his first visit as a public speaker and agitator for racial and economic justice (he did visit Sydney once before, under the radar, to act in the Matrix sequels). He comes “to listen and learn, get a sense of what’s going on in Australia,” he says, and “to say what I can and do what I can to cast some light on what I think is going on in the American empire … so we can learn from each other.”

As someone who tweeted support for the #soblakaustralia movement, West is convinced the history of colonialism has left the US and Australia in a similar predicament.

How do you ensure that black rage – Aboriginal rage – is filtered through love and justice, not hatred and revenge?

The question, says West, is always how to respond: “How do you ensure that the black rage, the Aboriginal rage, is filtered through love and justice and not through hatred and revenge?”

These are familiar refrains; West employs repetition much like the blues and jazz musicians he so often cites as inspiration. The points he makes about government and corporate complicity in racism and poverty are so lucid, his preacherly cadences so compelling, you don’t mind hearing what you’ve heard before.

But he’s also been accused of resting on his laurels of late, of abandoning academic pursuits in favour of celebrity. His most poignant and visible critic is his former friend and colleague Michael Eric Dyson, who published a scathing and controversial 10,000 word takedown of West in New Republic in April.

The bad blood between the two has festered for years, stemming in part from West’s sharp, often bitter criticisms of President Obama and the African American leaders like Dyson and the Reverend Al Sharpton who have his ear.

Related: The Cornel West-Michael Eric Dyson feud is petty. Black people are dying in the streets

In full flow: “People say, well you’ve been harsh on the president – it’s always tied to his policies. If I called him a ‘black puppet of Wall Street’ , it’s not the puppet that needs to be stressed, it’s Wall Street that is the major concern, and the fact that he has not been a countervalent force against Wall Street domination of the government ... We live in a state of emergency; we don’t have time for these little narrow narcissistic exchanges.”

West says the Obama administration is neglecting racial and economic crises. “You’ve got a black president, a black attorney general, a black head of homeland security, cabinet secretary. Every 28 hours a black and brown person is shot by police or a security guard – not one federal prosecution of a policeman for those shootings. So those black faces in high places do not translate into justice for poor and working people who are black and brown and white and others.”

He is also concerned about Obama’s role in shaping the highly secretive Trans-Pacific Partnership treaty (“Nafta on steroids” as he calls it), which will directly impact Australians . “For Barack Obama to be so obsessed with the fast-tracking of such a global rearrangement ... reveals his very, very deep neoliberal identity that’s tied to the promotion of corporate interests.”

West sees dark times ahead if things go on this way. He repeatedly warns of “planetary catastrophe” and says “when you connect massive surveillance, big banks, big corporations [and] dominating big government, you’re on the way to US fascism.”

But he glimpses hope in united popular movements. “In the United States, we live in the Ferguson moment , we live in the Baltimore moment , and we have a chance of that coming together, very much what Martin King was trying to do in 68, before he was shot down like a dog. We’ve got to do exactly what Martin was trying to do. And we have to be willing to get shot down like a dog like he was.”

For the new generation of African American activists – very much driven by women and the queer community, who West says are crucial to its strength – it’s not only about local problems. “You can see the internationalism among the young people. They talk about peasants in Mexico, they talk about Palestinians under Israeli occupation, they more and more want to talk about Dalits in India.”

West sees music and art as fundamental to African American political movements and their international visibility. “We as a blues people created a blues idiom. How do you deal with catastrophe? ... We confront catastrophe with a level of integrity and vulnerability and truth-telling, lack of self-righteousness, just soul disclosure.”

He cites Toni Morrison in her novel Beloved: “‘This is my soul, I’m offering up my great big heart to you’ – that’s the wonderful line [she] has. And that’s precisely what our great musicians always do, they offer up their great big heart. What you gonna do about it, world?”

Has African American music helped export black political rebellion around the world? “Once it takes off, the genie is completely out of the bottle,” he answers. “You can go to Colombia, Latin America, and get more sophisticated political hip-hop than you can in the States; you can go to the West Bank, to India or parts of Africa.”

Or Australia, where his tour will feature support from hip-hop inspired poets and artists including Luka Lesson and Omar Musa. “Once it takes off, it takes on a life and logic of its own, and that’s where we in the States have so much to learn from the rest of the world.”