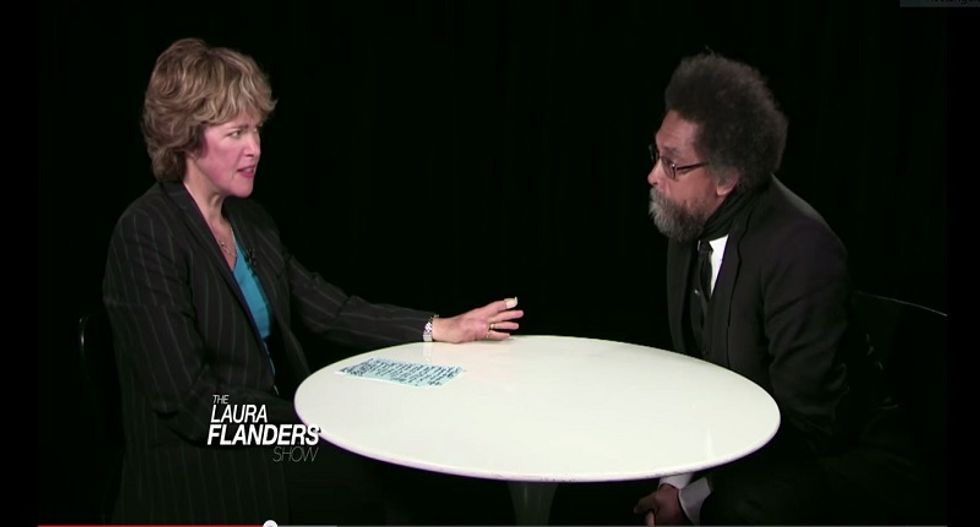 Beloved public intellectual Cornel West took to the Laura Flanders Show on Tuesday to talk about a "new militancy" in the national uprising against racism and police brutality, and how it gives him hope about the young generation currently picking up the civil rights movement's torch.

"There's a marvelous new militancy among the younger generation, and it's multi-racial, multi-cultural, led primarily by young black folk, primarily by women. And primarily by black queer women - new phenomena in that sense," he told Flanders.

He talked about white supremacy working on a structural, institutional level as well as on an individual one. The Black Lives Matter movement has succeeded in taking apart white supremacy using that structural analysis and taking it to the streets, Flanders pointed out.

The movement that has caught fire in places like Ferguson, Baltimore, New York, Cleveland and Florida comes in context with the failure of "black faces in high places" to undue structural white supremacy that results in part with a person of color being killed by police "every 28 hours," West said.

Wall Street executives and police officers who kill seem to be above the law.

"But of course we know how classist it is. Look at Wall Street, all the crimes on Wall Street, market manipulation, insider trading, not one Wall Street executive on high order going to jail. They still dominate the government up to this day," he said, making the connection between "the rule of law that is deeply racist" and "deeply tilted toward Wall Street and the well-to-do."

He and Flanders talked about white supremacy as an active, evil force. It hit home for West when he was a mere 9 years old, he said. In a chilling moment, he recalled refusing to salute the flag "because my uncle had been lynched and they wrapped his body in the U.S. flag as it hung from the tree."

The 20-minute interview covered a broad array of topics, during which time West took a moment to respond to Michael Eric Dyson, who took to the New Republic to criticize West with a 10,000-word essay in which he "tried to school" West on how to criticize Obama, as Flanders put it.

"I want everyone to lift they voice, but the question is whether you're going to be honest and candid about it," he responded. "When I hear talk about Wall Street government, Main Street left out to dry, when I hear talk about the drone presidency and I see the innocent lives lost, when I see the massive surveillance that Brother Snowden and Sister Manning and others have disclosed, righteous indignation flows... I'm full of righteous indignation to see these structural injustices."