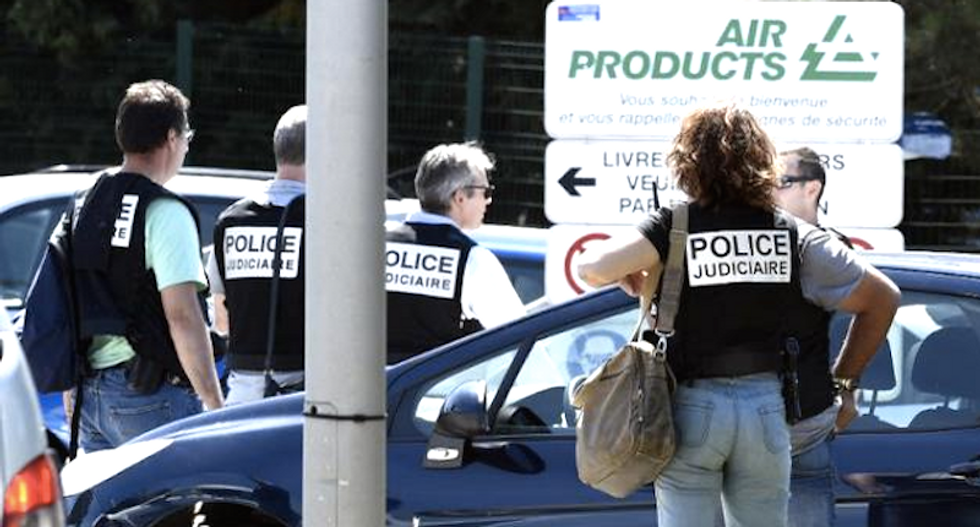 French police secure the entrance of the Air Products company in Saint-Quentin-Fallavier, near Lyon, central eastern France, on June 26, 2015 after a suspected Islamist attack (AFP)

A suspected Islamist attacked a gas factory in eastern France on Friday, pinning a decapitated head to the gates and injuring at least two others with explosive devices before being arrested.

"According to the initial findings of the enquiry, one or several individuals on board a vehicle drove into the factory. An explosion then took place," said one source close to the enquiry.

"The decapitated body of a person was found nearby the factory but we do not yet know whether the body was transported to the place or not," added this source, adding that a "flag with Arabic writing on it was found at the scene."

French President Francois Hollande, who rushed back to France from a summit of EU leaders in Brussels to deal with the crisis, said the assault was a "terrorist attack."

He added that the attacker has been identified and there may have been a second attacker.

"This attack was in a vehicle driven by one person, perhaps accompanied by another, which rammed its way at high speed into this establishment which contained bottles of gas," Hollande told a hastily convened news conference.

"The intent was without doubt to cause an explosion. It was a terrorist attack."

The killing came nearly six months after the Islamist attacks in and around Paris that killed 17 people in January, starting with a shooting at satirical magazine Charlie Hebdo.

One suspect entered the factory owned by American group Air Products and set off several small explosive devices, sources close to the investigation said, with several people hurt in the assault.

Police said it was unclear whether the attacker was acting alone, or had accomplices.

The man thought to be the person who carried out the attack has been arrested, according to sources close to the enquiry, who said he was known to the security services.

"We cannot say anything reliable yet about the identity of the person arrested who is refusing to speak and did not have any identity papers," said a legal source.

Meanwhile, Interior Minister Bernard Cazeneuve said he would go "immediately" to the scene, his office said.

Prime Minister Manuel Valls, who is on an official trip in South America, ordered increased security measures at all sensitive sites in the area.

The attack occurred around 10:00 am local time (0800 GMT), according to local media, in the small town of Saint-Quentin-Fallavier, around 40 kilometres (25 miles) from Lyon, France's second city.

"This is a small town and a large industrial zone. There's never been any concern in the region. We're all surprised. We're really in shock this morning," an employee at a nearby business told rolling news channel BMFTV.

France has been on high alert since January 7 when two Islamist brothers attacked Charlie Hebdo, killing 12. A policewoman and four hostages in a Jewish supermarket were also killed during the three-day attacks.

The January attacks drew record crowds onto the streets of Paris in a historic "march against terrorism."

Nearly four million people marched through the streets of France and more than 1.5 million in the French capital along with dozens of world leaders to express defiance in the wake of the attacks.

France has a high proportion of people that have gone to fight alongside Islamists in Iraq and Syria and has been on alert for possible attacks on its soil since the Charlie Hebdo attacks.

The new French law allows authorities to spy on the digital and mobile communications of anyone linked to a "terrorist" inquiry without prior authorization from a judge, and forces Internet service providers and phone companies to give up data upon request.

Intelligence services will have the right to place cameras and recording devices in private dwellings and install "keylogger" devices that record every key stroke on a targeted computer in real time.