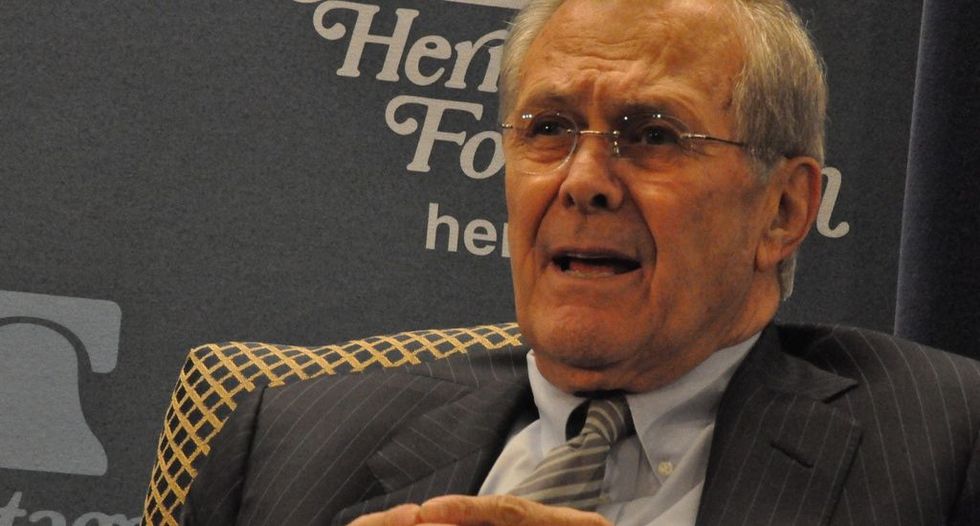 Donald Rumsfeld, the secretary of defense who led the United States into the Iraq war, has told an interviewer that he did not think, at the time of the 2003 invasion, that building a democracy in Iraq was a realistic goal.

The statement contradicts speeches and memos that Rumsfeld, now 82, personally issued before and after the invasion of Iraq.

“The idea that we could fashion a democracy in Iraq seemed to me unrealistic,” Rumsfeld told the Times of London. “I was concerned about it when I first heard those words … I’m not one who thinks that our particular template of democracy is appropriate for other countries at every moment of their histories.”

The audience for Rumsfeld’s speech at the Council on Foreign Relations in May 2003, two months after the invasion, heard the opposite message. “This much is clear: we have a stake in their success,” Rumsfeld said then, referring to the people of Iraq.

“For if Iraq – with its size, capabilities, resources and its history – is able to move to the path of representative democracy, however bumpy the road, then the impact in the region and the world could be dramatic. Iraq could conceivably become a model – proof that a moderate Muslim state can succeed in the battle against extremism taking place in the Muslim world today.”

Rumsfeld also held up the prospect of Iraq as a “model” democracy behind the scenes. As a co-signatory of the statement of principles of the Project for a New American Century thinktank, Rumsfeld urged Bill Clinton to topple Saddam Hussein and called on the US to “accept responsibility for America’s unique role in preserving and extending an international order”. The statement is widely identified as a germ of what became known as the neoconservative theory of “democratic dominoes” in the Middle East.

Throughout the early Bush years, key Rumsfeld lieutenants were top purveyors of the dominoes theory. Paul Wolfowitz, a fellow member of the Project of the New American Century who served as deputy defense secretary in Rumsfeld’s Pentagon, predicted that Iraq would become the “first Arab democracy” that would “cast a very large shadow, starting with Syria and Iran, across the whole Arab world”.

George W Bush, under whom Rumsfeld served as defense secretary for six years, had scathing words in his 2004 state of the union address for anyone who doubted the project of Iraqi democracy. “We also hear doubts that democracy is a realistic goal for the greater Middle East, where freedom is rare,” Bush said .

“Yet it is mistaken and condescending to assume that whole cultures and great religions are incompatible with liberty and self-government. I believe that God has planted in every human heart the desire to live in freedom. And even when that desire is crushed by tyranny for decades, it will rise again.”

Recent months have seen an outbreak of former Iraq war apologists seeking to re-enter the public debate over Middle East policy. Other architects of the war, such as Wolfowitz and former national security adviser Stephen Hadley, have reportedly become foreign policy advisers to Jeb Bush, the older brother of the former president and prospective 2016 presidential candidate.

Statements by Republican candidates in the 2016 presidential race indicate that the history of the Iraq war, and how it was lost, will be up for debate, especially with a Bush in the race. At his presidential announcement last week, former Texas governor Rick Perry called the withdrawal from Iraq “a national disgrace” and argued that the US had “won” the war in 2009 only to see the Obama administration squander its victory by leaving.

In a July 2001 memo to then national security adviser Condoleezza Rice, Rumsfeld wrote: “Within a few years the US will undoubtedly have to confront a Saddam armed with nuclear weapons. Iran will almost certainly have a nuclear weapon sometime within the next five years, and that will change the balance in the region notably.”

In the Times interview, Rumsfeld said the US was in a “war of ideas”.

“You begin to look at this thing not like a war, but more like the cold war,” Rumsfeld said. “You’re not going to win this with bullets, you’re in a competition of ideas.”