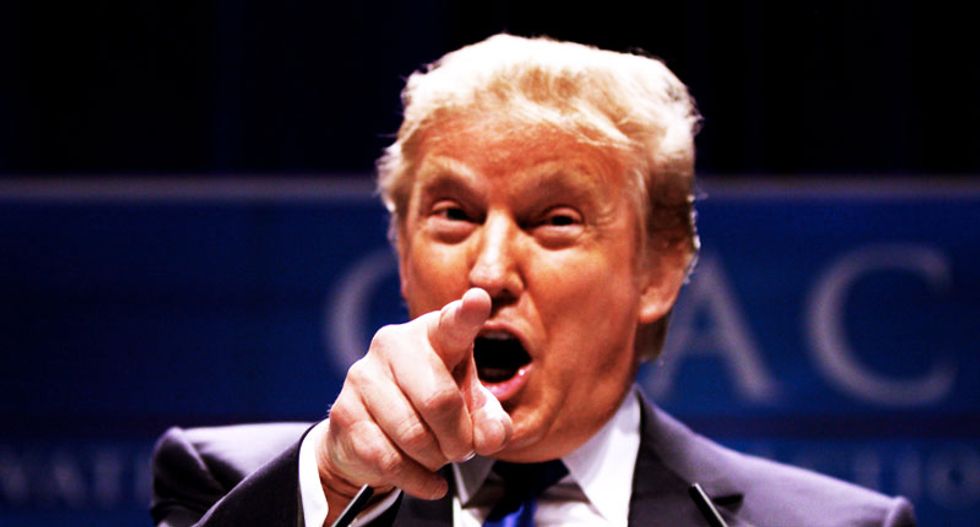 As you have no doubt heard, Donald Trump -- business man, real estate developer, reality show star, spouter of self-promoting effluvia -- has chosen to finally make good on his threat to make a run at the GOP presidential nomination.

As they gleefully say at Democratic National Committee headquarters: "Allahu Akbar!" which is liberal for either "kill whitey" or "eat the rich." Maybe both.

While Democrats have pretty much coalesced around Hillary Clinton -- although still briefly flirting with adorable Bernie Sanders, but that's a passing fancy -- Republicans have a freak show from hell on their hands. To date, their announced candidates who have a chance at the White House range from those for whom the presidency is  a slight possibility (if it turns out Hillary really did kill Vince Foster as a sacrifice to our Dark Lord Baphomet) to those with absolutely no goddam chance on earth or in heaven, by which we mean: Bobby Jindal.

Why have the gods treated the Republican Party so poorly?

It could be that most belonging to the reasonable wing of the party -- made up of the folks who think government serves a purpose for the common good besides blowing up boogeyman existential threats elsewhere -- have been purged and those remaining who might lean that way are scared to death of the Tea Party Monster that Fox News feeds and grooms.

Since the Republican Party is desperate for the yahoo know-nothing anti-science virulently racist vote to replenish their aging demographic, their presidential nominee slate has become a big circus tent for every clown with a PAC and a guest spot on Hannity.

With his unpolished bombast, his nativist streak, his faux patriotic hoo-hah, and his garish gold-plated toilet version of class, Trump feeds into the hopes and dreams of the kind of person who thinks a three-day vacation at a pyramid-shaped hotel in Vegas is the the height of luxury. He speaks their language; blunt, brash, dull-witted, and untethered by deep thought or an interior live that is more than a endless loop of sleep, eat, watch TV, and poop until a merciful death.

(Added) I see I've been vindicated on that count. Also, too.

That group of potential primary voters is going to keep Trump around long enough to suck up all of the  media attention oxygen in the room, forcing his primary opponents to have to double-down on the stupid just to get a soundbite on the evening news in order to stay mildly relevant until he drops out due to boredom.

How does the conservative press view Trump?

Witness NRO's Kevin Williamson -- who is basically Jonah Goldberg with the ability to finish a thought -- welcoming Trump into the fold, under the less-than-equivocal title of "Witless Ape Rides Escalator."

Donald Trump may be the man America needs. Having been through four bankruptcies, the ridiculous buffoon with the worst taste since Caligula is uniquely positioned to lead the most indebted organization in the history of the human race.

Want more? Of course you do.

Donald Trump, being Donald Trump, announced his candidacy at Trump Plaza, making a weird grand entrance via escalator — going down, of course, the symbolism of which is lost on that witless ape. But who could witness that scene — the self-made man who started with nothing but a modest portfolio of 27,000 New York City properties acquired by his millionaire slumlord father, barely out of his latest bankruptcy and possibly headed for another one as the casino/jiggle-joint bearing his name sinks into the filthy mire of the one U.S. city that makes Las Vegas look respectable, a reality-television grotesque with his plastic-surgery-disaster wife, grunting like a baboon about our country’s “brand” and his own vast wealth — and not see the peerless sign of our times?

And things kind of go downhill from there.

There are worse GOP candidates-- yeah, I'm talking about you, yet-to-announce-Bobby Jindal -- but few who will command the media attention Trump will get on the off-chance he says something, well, weird or offensive or crazy.

I know, what are the odds of that happening?

This is the hand the Republicans have dealt themselves and they're looking at possibly twenty candidates, most of whom seem to being playing some kind of long game grift, but none more offensive --and entertaining!-- than Donald Trump.

You broke it, you bought it, GOP. Gold-plated crapper and all...