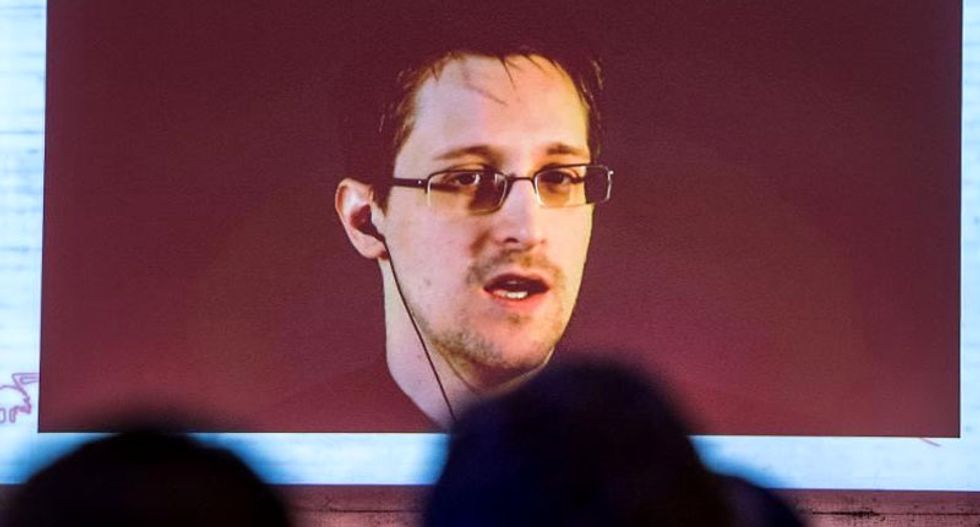 Former security contractor Edward Snowden, pictured on March 18, 2015 via a live video call, won a Norwegian prize for freedom of expression Tuesday and received yet another invitation to leave his exile and receive the award in person (AFP)

Former security contractor Edward Snowden won a Norwegian prize for freedom of expression Tuesday and received yet another invitation to leave his exile and receive the award in person.

The Norwegian Academy of Literature and Freedom of Expression said the 31-year old fugitive had won the Bjornson Prize -- named after a Norwegian Nobel literature laureate -- "for his work protecting privacy and for shining a critical light on US surveillance of its citizens and others."

Snowden, a former analyst at the US National Security Agency, has lived in exile in Russia since 2013 after revealing mass spying programmes by the United States and its allies.

The US administration has branded him a hacker and a traitor who endangered lives by revealing the extent of the NSA spying program.

The academy requested assurances from the Norwegian government that Snowden would not be extradited to the US if he travelled to Norway to receive the 100,000 kroner ($12,700, 11,500 euros) prize money in person on September 5.

Norway's justice ministry said it was up to immigration authorities, who indicated they would consider any entry request when and if they received one.

Snowden was awarded Sweden's Right Livelihood Award in 2014 but chose to accept it by video link rather than leaving his exile in Russia.

He has been nominated for the Nobel Peace Prize for the second year in a row. The Nobel will be awarded in Oslo on October 9.