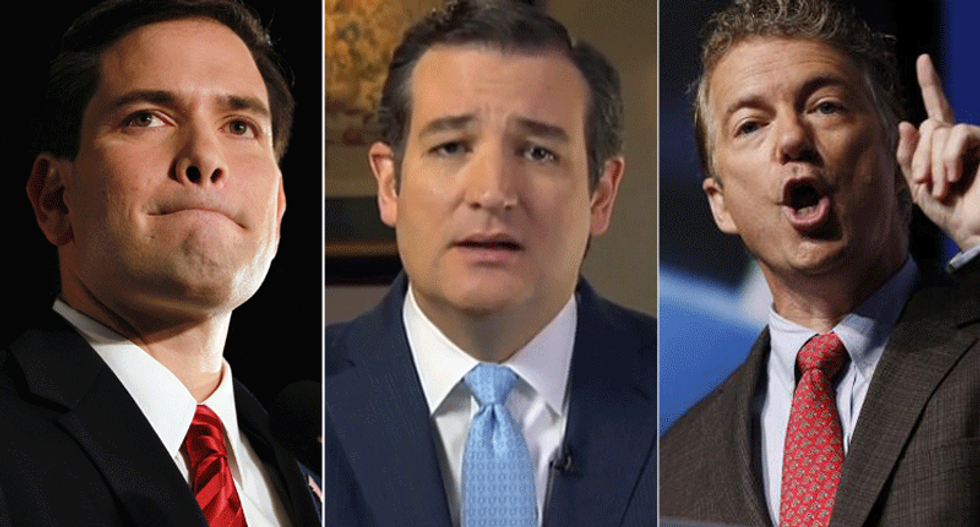 Fearing a backlash from voters for wading into a contentious issue that they would rather not address, leading candidates for the 2016 GOP nomination for the presidency are running for cover rather than take a stand on South Carolina's Confederate flag controversy.

While 2102 Republican presidential nominee Mitt Romney once again took a stand against the flag as he did in 2008, current nominees are stepping carefully around the issue, deferring to "state's rights" without offering a personal opinion.

On Saturday, Romney renewed his support for taking the flag down, tweeting, "Take down the #ConfederateFlag at the SC Capitol. To many, it is a symbol of racial hatred. Remove it now to honor #Charleston victims."

South Carolina Senator Lindsey Graham defended his home state flying the flag, saying, "Well, at the end of the day it's time for people in South Carolina to revisit that decision. [That] would be fine with me, but this is part of who we are,"

The New York Times reports that former Florida Governor Jeb Bush said he retired the flag to a museum under his watch, but left the door open for South Carolina residents to make their own decision once they get over the shock of the Charleston church murders committed by Dylan Roof.

Roof allegedly posted a highly racist manifesto online accompanied by photos of himself hold the flag of the Confederacy as well as the gun used to murder the nine African-American churchgoers.

“Following a period of mourning, there will rightly be a discussion among leaders in the state about how South Carolina should move forward and I’m confident they will do the right thing,” Bush said.

Texas Senator Ted Cruz also demurred, saying the flag is “a question for South Carolina. And the last thing they need is people from outside of the state coming in and dictating how they should resolve it.”

Cruz, who has a reputation for being a rhetorical bomb thrower, also lamented that the issue was being used "as a wedge to try to divide people.”

Rubio's comments were repeated by former Arkansas Governor Huckabee on NBC's Meet the Press, and  Wisconsin Governor Scott Walker who refused to comment on whether he thought flag of the Confedearcy was racist.

"I just think before I or anyone else weighs in on anything to do with policy, whether it's this or any other policy decisions, we should honor the dead and the families by allowing them to bury their loved ones," Walker explained." And then you could perfectly ask me that question at some point in the next week or two when that's done."

The National Journal reports that ex-HP CEO Carly Florina went on the record as calling the flag "offensive to many," but still wouldn't go as far as fellow business executive Mitt Romney.

"I think it's clearly a symbol that is very offensive to many, but my personal opinion is not what's relevant here," Fiorina told reporters at a conference in D.C. "What's relevant here is what the people of South Carolina choose to do next."

Tennessee Senator Rand Paul has yet to weigh in on the subject, no doubt reflecting upon his previous brush witha Confederate flag controversy, when he employed Jack Hunter, who went by the name Southern Avenger online while wearing a Confederate Stars and Bars mask, as his social media adviser in Washington.