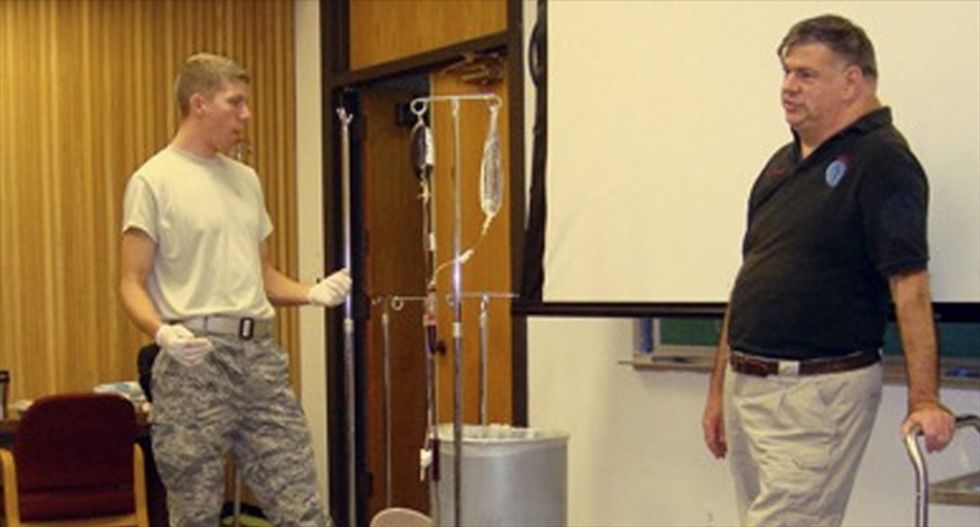 Dr. John Hagmann (R) teaches a course in treating battlefield trauma in this handout photograph taken around 2010 and released on June 17, 2015. REUTERS/HANDOUT via Reuters

A state board revoked the license of a former U.S. Army doctor on Friday, finding that he plied students with hypnotic drugs during battlefield-trauma training and performed dangerous procedures, including intentionally inducing shock.

The doctor, John Henry Hagmann, was cited for training he provided in 2012 and 2013 in Virginia, North Carolina, Colorado and Great Britain. Students testified on Friday that Hagmann also performed penile nerve blocks and instructed them to insert catheters into one another's genitals.

"The evidence is so overwhelming and so bizarre as to almost shock the conscience of a prosecutor who's been doing this for 26 years," Assistant Attorney General Frank Pedrotty told the Virginia Board of Medicine.

Two students provided the board with pictures of chest scars they received when procedures went awry. Three students testified that others became violently ill or began hallucinating after Hagmann gave them ketamine.

"What we're seeing is way off the charts," said board chair Kevin O'Connor. "Quite honestly, I'm speechless."

Hagmann, who did not appear at Friday's hearing, has told Reuters that he did nothing wrong. Hagmann can appeal but could not be reached for comment afterward.

"This is so abhorrent and abnormal," testified John Prescott, chief academic officer, Association of American Medical Colleges. "In a combat setting, I have a hard time – I mean, there's no indication you would ever need a penile block, ever."

Reuters reported on Wednesday that military officials had long known about Hagmann's methods. A four-star general briefly halted them in 2005, but the doctor resumed his government contracts, earning at least $10.5 million since then.

Two male students testified on Friday about private rectal exams. One said that he gave Hagmann an exam that the doctor filmed. The other described regret that he allowed Hagmann to perform a rectal exam on him.

"I can't imagine a worse violation of trust," said the student, whose name, like other trainees who testified, was shielded from the public. "There's no excuse for the way this course was run."

Colonel Neil Page, who investigated the matter for the Uniformed Service University for the Health Sciences, the military medical school, testified that Hagmann's defense that the students volunteered for procedures is irrelevant because they were intoxicated.

"There was a line that was crossed," Page said.

Gab, a far-right social media platform that has had up to 4 million users, recently suffered a major hacking — and the platform was so compromised that countless passwords were stolen. Journalist Micah Lee discusses the hacking this week on The Intercept, reporting that former President Donald Trump's Gab account used an e-mail address belonging to Gab CEO Andrew Torba.

Lee explains, "The hacker made off with the e-mail addresses and encrypted passwords of all 4 million of the site's users and the content of more than 39 million posts, including everything posted to 7632 private groups, and leaked them to the radical transparency group Distributed Denial of Secrets. On Monday, DDoSecrets released the nearly 70 gigabytes of hacked data to journalists and researchers."

With NBA games back in Madison Square Garden and certain movie theaters reopening at the end of the week, New York could soon celebrate the resumption of the performing arts -- the governor announced Wednesday that theaters could reopen at limited capacity from April 2.

Performance halls in the US cultural capital, closed since March 12, could reopen at 33 percent capacity, or 100 people maximum, with mandatory mask-wearing and social distancing, Governor Andrew Cuomo told a press conference.

An education camp and for right-wing extremists and other neofascists