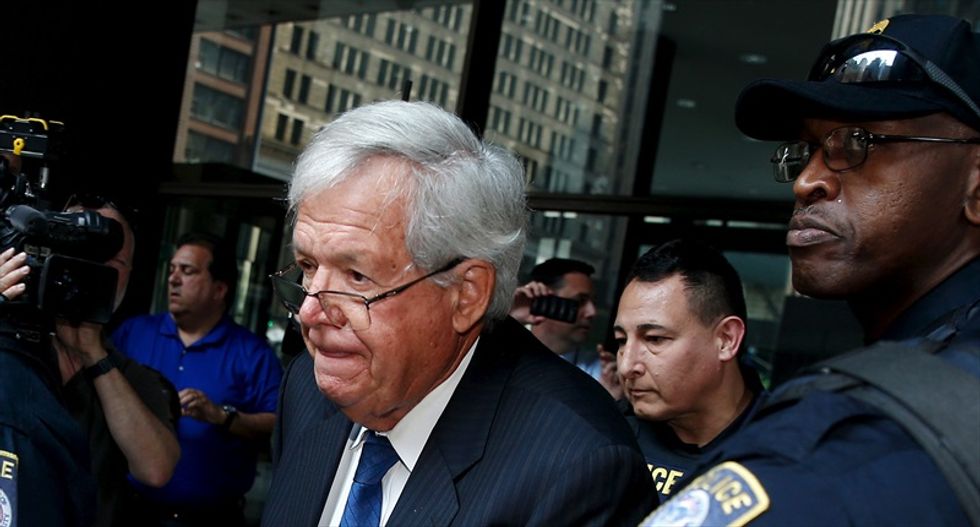 Former House Speaker Dennis Hastert is surrounded by officers as he leaves federal court after pleading not guilty to federal charges of trying to hide large cash transactions and lying to the FBI in Chicago on June 9, 2015. Photo by Jim Young for Reuters.

Federal prosecutors on Friday petitioned a judge to keep secret their evidence in the case against former U.S. House Speaker Dennis Hastert, who pleaded not guilty on Tuesday to charges of trying to hide cash transactions and lying to the FBI about it.

Hastert had allegedly paid close to $2 million to an individual to conceal past misconduct, which was reportedly sexual contact with a male student while he was a teacher and coach in the 1960s and 1970s.

In a motion filed before Judge Thomas Durkin, who is hearing the Hastert case, prosecutors said sensitive information in the case should not be disseminated because it would "adversely affect ... the privacy interests of third parties" and also said that Hastert's defense attorneys do not oppose the motion.

Prosecutors asked the judge to restrict distribution of materials in the case to key defense personnel and witnesses, and asked that copies not be made without the court's permission.

They also asked to submit under a court seal certain materials they said were sensitive.

Durkin will hear arguments for the motion on June 18, when there is a status hearing in the case. Hastert, who paid a small bond and is not in custody while awaiting trial, does not have to appear at the hearing.

Hastert and his lawyers have made no public comment on the case.

According to the indictment, Hastert withdrew $1.7 million in cash from his bank accounts from 2010 to 2014. He is charged with "structuring" $952,000 of those withdrawals, taking the funds out in increments of less than $10,000 to evade the requirement that banks have to report large cash transactions.

Prosecutors allege he promised to pay $3.5 million to an individual from his home town of Yorkville, Illinois, where he was a teacher and wrestling coach at the local high school.

Hastert, known as Denny in Yorkville, and often called Coach during his years in Congress, was the longest serving Republican house speaker, from 1999 to 2007.