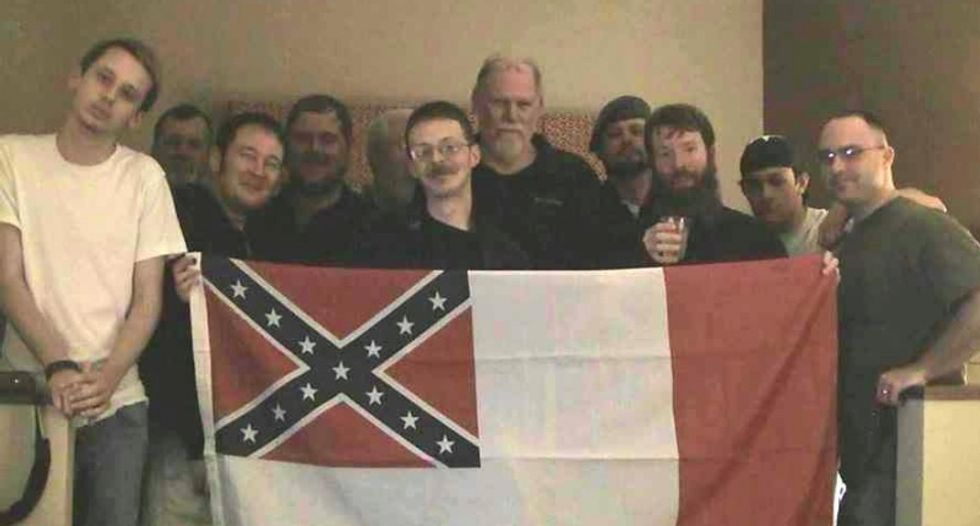 League of the South supporters (screenshot/Facebook)

A neo-Confederate organization known as the League of the South (LOS) has threatened legal action against a police department in Alabama after it fired an officer for being a senior member of the white nationalist group.

On Saturday, the LOS released a statement arguing the Anniston police department only fired Josh Doggrell because of outside political pressure. The group is calling on members to offer financial support.

Noting that senior officials in Alabama had known about his white supremacist sympathies since at least 2006, and been okay with them, the LOS reasons that, "because of pressure from the NAACP and the political atmosphere in the wake of the Charleston, SC, church shooting, the city of Anniston panicked and fired [Doggrell] without giving the matter proper consideration. His conduct as a police officer certainly had nothing to do with his firing."

According to the League of the South, the Anniston police were legally in the wrong for firing Doggrell. If the group raises enough money, it intends to hire a lawyer to challenge the department.

Occidental Dissent, a white supremacist website, published a statement by Doggrell about his departure: “Friday afternoon the carrot was dangled by internal affairs. Would I be willing to 'flush' the League entirely in order to save my job? The answer was a swift no. Three hours later, my termination was announced. Nineteen years, my salary, my benefits, and my retirement are gone. I’m not looking for sympathy, but I do ask for support."

“And I’ve gotten it," Doggrell continues. "I am humbled and grateful for the promises of support, including financial, I have received. I think I have a good case, and I am planning to take this to court."

The LOS believes in southern secession and the establishment of a Christian theocratic state run by “Anglo-Celtics.” Doggrell has been a member of the organization since 1995. Officials fired Doggrell last week after the Southern Poverty Law Center released a video of the former officer bragging to an audience of local white supremacists that the police department he worked for shared and encouraged his perspective on issues of race.