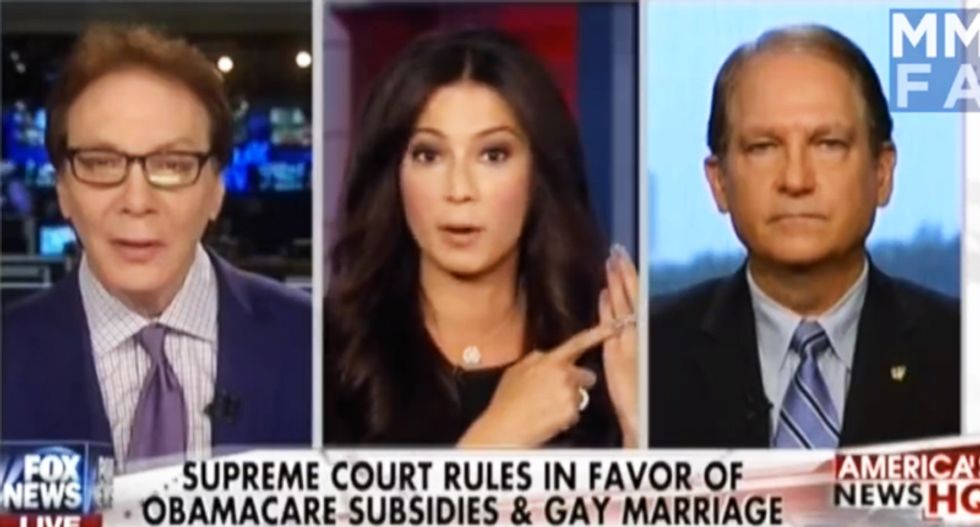 In a stunning and deeply personal commentary on the legalization of same-sex marriage, a Fox News host passionately defended the Supreme Court's decision by launching into a diatribe against those who would prevent two people who love each other from being married.

In video captured by Media Matters, Fox host Julie Banderas left no doubt how she feels about same-sex marriage, citing her gay sister and gay friends whose wedding she looks forward to.

Responding to a comment from a viewer who felt the matter should be put to a vote by the public, Banderas went off as she pointed at her own wedding ring.

"Let me just say this. I'm a married woman, I have a ring on my finger," she began. "I never asked anyone to vote whether or not I had the right to do this."

"I have a gay sister. She was the maid of honor at my wedding. I would love to be able to be at her wedding someday, and now I can," she continued  "And there are so many others, one of my best friends here at Fox is a gay producer, he walked my mother down the aisle at my wedding and now I get to be at his."

"Who has the right to tell someone who loves another person -- I don't care about their gender or their sex or the color of their skin -- that they the right to spend the rest of their life with somebody they love."

Georgetown Professor Brad Blakeman agreed, saying, "You have a great point and the Supreme Court has agreed with you -- the majority -- and we have to accept the ruling of the Supreme  Court."

Watch the video below, posted by Media Matters for America below:

Take two minutes to watch why this Fox anchor is celebrating marriage equality. Our friends, families, co-workers. That's what it's all about:

Posted by Media Matters for America on Monday, June 29, 2015