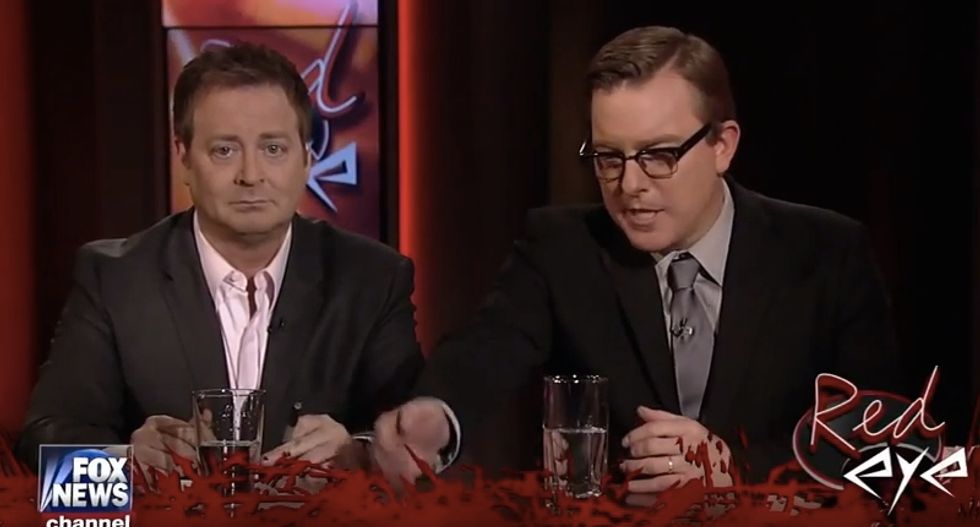 Caitlyn Jenner is the new chosen name and identify of Bruce Jenner, an olympic athlete and television star.

In a clip Think Progress posted today of Fox's 3:00 AM talk show, Reason magazine editor Matt Welch describes the tyrannical methods of people unknown to him personally, but who are vocal about LGBT rights issues on social media. “This weird like Twitter mob thing, as soon as something happens, you know?" Welch begins. "Bruce becomes Caitlyn Jenner. Then there’s a thousand people saying whatever the mores are right now, which will be totally different a month from now. Everyone has to follow it right now or else they’re all human monsters.”

"Exactly! I know!" touring comedian Tom Shillue agrees. "And I keep calling him Bruce and people act like I’m trying to be, like, politically incorrect.”

Andy Levy, the show's libertarian-leaning ombudsman, asks Shillue to stop calling Jenner -- who is transgender -- Bruce. "She's Caitlyn," Levy says. "What the hell is wrong with you?"

“Andy, if you changed your name," Shillue replies. "I would forget and I would keep calling you Andy, but it wouldn’t have to be politically incorrect.”

Comedian Mark Normand remarks that Levy is "unisex" and "can go either way." Normand later jokes, "Bruce Jenner, look! He looks great now. You got to admit he looks good. She looks great, but is it worth the paycut?” Normand also tweeted out his on air joke.

"You are a woman," Shillue transitions, turning toward host Jedediah Bila. Shillue asks for her thoughts. Bila suggests getting rid of urinals altogether, and having unisex bathrooms, preferably without stalls.

"I think my solution is best," Shillue declares. He praises the design of men's bathrooms in sports stadiums. They're "like a crowded subway," Shillue describes, "but everybody's got their penis out."

"I will say," Normand observes. "Isn't it fun peeing on the ice? You feel like a superhero. Melting power."

The group of talking heads joke that the end of stalls would make it harder to buy drugs through the gaps under the doors. Normand references Larry Craig, formerly a Republican senator from Idaho, who famously sought out gay sex partners in airport bathrooms.

But Levy holds his ground on calling Caitlyn Jenner by her newly public name and gender. “If we can use conservatism’s evolution on gay issues as a guide," Levy tells his colleagues, "in about 30 years, most of y’all will stop using the transgendered [sic] as a punchline.”

Normand has a history of making misogynistic comments on social media. Some recent ones, below, including a tweet likening crying women to cockroaches he failed to kill:

When you're fighting with a girl and she starts crying its the same feeling as when you're about to kill a roach and it starts flying.
— mark normand (@mark normand)1432321322.0

Dinner dates are fun because you and the waiter are both pretending to be better people to get something you want from the other person.
— mark normand (@mark normand)1432057831.0

Marriage scares me because you have to live with someone you hate forever and a wife.
— mark normand (@mark normand)1430507244.0

Watch the 3:OO AM Fox News meltdown about Twitter criticism, gender pronouns, and the design of men's bathrooms: