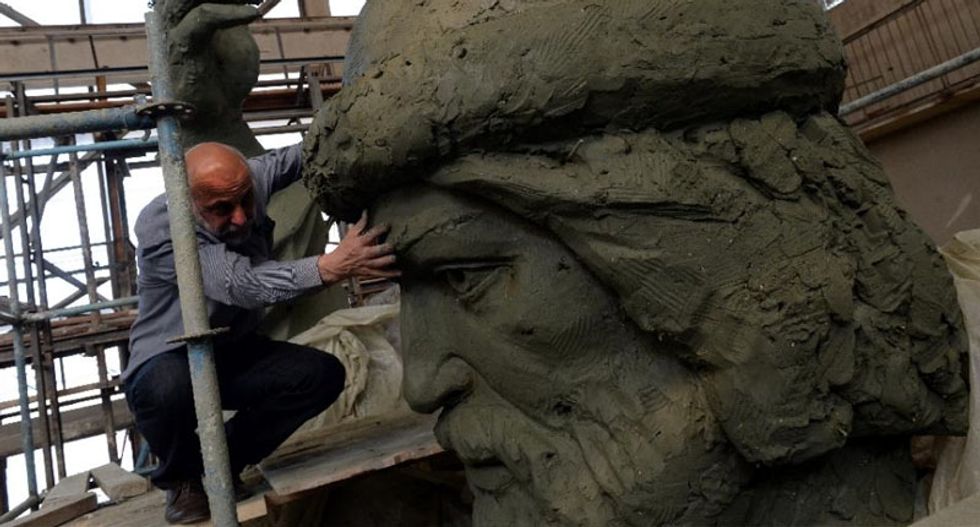 Russian sculptor Salavat Shcherbakov works on a model for a monument to Vladimir the Great at his workshop in Moscow on June 2, 2015 (AFP Photo/Vasily Maximov)

Scaffolding surrounds the vast clay sculpture-in-progress inside a warehouse on Moscow's outskirts, yet already the statue of Vladimir the Great has caused an outcry as big as the monument itself.

The 24-metre (78-feet) high likeness of the man who brought Christianity to Kievan Rus -- the forerunner of modern Russia and Ukraine -- is set to tower over the capital, the latest potent symbol in a surge of patriotism taking hold in Russia.

Prince Vladimir is revered as a saint by the Russian Orthodox Church and a hero by others, including the noted sculptor of the work, Salavat Shcherbakov. But not all Moscow agrees.

"He's a figure whom the people, the country, can rely on. And he is important right now," he said, working on the ornate robes as Vladimir looms above, right hand raised high ready to hold a cross.

The final, cast bronze is scheduled for installation in September on a prime spot called Sparrow Hills, overlooking all of Moscow -- and where all of Moscow will see Vladimir.

But the choice has proved so divisive it may be changed.

In a flurry of public anger, more than 59,000 people joined an online petition against the planned location, one of the city's best-loved viewpoints high above Moscow's centre.

Several thousand students and staff at the nearby Moscow State University also signed an open letter to President Vladimir Putin opposing the statue.

Even some of the leather clad bikers who roar up to Sparrow Hills each evening are not happy. "Who is this statue for? I think it's totally inappropriate here," said Sergei Govinov, two gold crosses dangling on his tanned chest. "Where are we going to meet now?"

"It outrages all sorts of different people," said local councillor and anti-statue campaigner Yelena Rusakova. "In recent years in Moscow, I can't remember another example of so many people signing a petition and writing letters."

Tall as it is, the statue is still dwarfed by Moscow's biggest such monuments, like the Soviet-era Worker and Collective Farm Worker that stands 25 metres high on a 33-metre pedestal. And a widely reviled monument to Tsar Peter the Great by Georgian sculptor Zurab Tsereteli is even taller, at 98 metres.

Backed by the Russian Orthodox Church and the culture ministry, the Vladimir monument is part of a drive to boost patriotism by evoking historic glories and conservative Christian values.

An Orthodox youth group gathered more than 62,000 signatures online in support of the project.

But opponents say Vladimir the Great has no historic links to Moscow, which did not exist at the time.

And they say he is already commemorated with a large statue in Kiev, the capital of former Soviet neighbour Ukraine with which Moscow is locked in a bitter standoff after it annexed the Crimea region and was accused of stirring a separatist conflict.

Other opponents have warned that the 300-tonne statue perched on the edge of a steep 100-metre high slope above Moscow River could cause a catastrophic landslide.

Scuffles recently broke out at a protest at the site when pro-Kremlin bikers tore posters and shouted abuse at people campaigning against the statue.

In a surprise, last-minute turnabout, the pro-government military history society that commissioned and financed the monument has now asked city authorities to consider other locations.

The statue, the society said citing the protests and "safety concerns", should be an "indisputably uniting factor".

Anti-statue protestor Rusakova has cautioned opponents not to relax and "to continue the campaign", noting the city council will not rule on the matter until July.

"The most important thing is that there is a shared desire among the citizens of our country for this sculpture to go up," said sculptor Shcherbakov, denouncing what he sees as "some people's purely ideological" arguments against the monument.

Wherever it lands, he said, it should be a "good site... worthy of a prince."