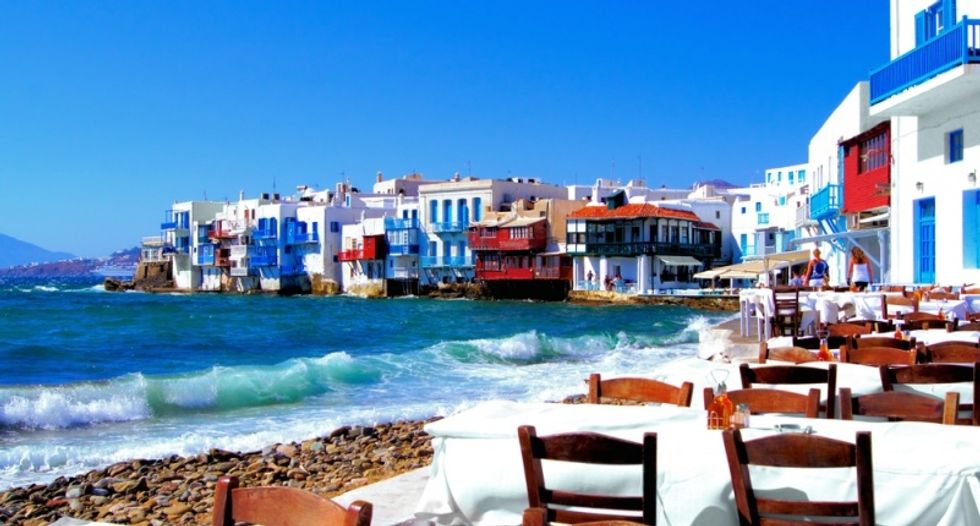 By snubbing a bailout deal and slapping capital controls on its banks Greece has set a course into choppy, uncharted waters that could lead to fresh economic upheaval and a euro exit.

After five months of torturous negotiations and just days away from a default, Greece's radical leftist Prime Minister Alexis Tsipras threw the political equivalent of a curve ball by calling a referendum on the bailout proposals for next Sunday.

The vote will likely be decisive in whether Greece stays in the euro or crashes out.

It may be a truism that a week is an eternity in politics, and this one may well seem like it to Greece.

The capital controls and temporary closure of banks will likely bring business screeching to a halt as companies cannot freely access their accounts and stop accepting bank and credit cards for payment.

On Tuesday, Greece will likely default on a 1.5-billion-euro ($1.7-billion) euro payment due to the IMF. On the same day, the international bailout plan on which Greeks will vote on Sunday will formally expire.

Neither the capital controls, which Cyprus used in 2013 when it was bailed out, nor a default are in themselves an automatic trigger for a Greece exit from the eurozone, a so-called Grexit.

"But it would put Greece on the slippery slope towards Grexit," said Berenberg Bank economist Holger Schmieding.

Steps towards that would be issuing IOUs to pay state workers and bringing back the drachma, although these could exist alongside the euro for a while.

But that is not likely to happen in the week before the referendum.

The ECB, while not giving Greek banks extra cash on Sunday, did not cut off the financial lifeline that has kept them, and by extension the Greek government, afloat for the past five months.

The fact that the bailout plan the Greeks are voting for has become void may not be an insurmountable problem as the EU will be keen on keeping Greece in the euro.

However Tsipras said Sunday he had demanded again an extension to the bailout, meaning a deal could be cut in the coming days.

But for Greece to stay in the euro Greeks will need to vote in the referendum to approve the bailout conditions, which include further pension and wage cuts and tax hikes in return for the five-month, 12-billion-euro extension of the rescue package.

It was the five years of austerity-induced recession that wiped off a fifth of Greece's economic output and in turn propelled the radical left Syriza to power in January.

Tsipras has made clear he will be campaigning for a 'No' vote in the referendum.

A rejection of the EU-IMF bailout conditions would no doubt confirm Greece on its course to an exit from the euro.

"For Greece, Grexit would be the abyss," said Schmieding, as the reintroduction of a weak drachma would lead to a hike in import prices that would hurt the most vulnerable.

"It could be a social catastrophe well beyond anything the country had to endure in the first years of bailout programmes which, from 2010 to 2012, had indeed been overly harsh," he said.

While many economists have noted that bringing back the drachma would allow for a major devaluation, needed to get the Greek economy competitive again, this would take years and still depend on the government introducing reforms and reinstalling confidence.

Economists Daniele Antonucci and Elga Bartsch said in a client note on Sunday that "the Greek economy is unlikely to benefit from an exit."

Schmieding noted that opinion polls have consistently shown a large majority of Greeks want to stay in the euro, and that supporters of the bailout programme outnumber opponents.

A 'Yes' vote would be a major rebuke for Tsipras, and could trigger a government shakeup or fresh elections.

The ECB, which said it was open to reevaluating its emergency support for banks, could reopen the tap, helping keep banks afloat while a new bailout deal is negotiated.

The EU has a major incentive to agree on a new deal for Greece, as a euro exit would entail Athens defaulting on all of its foreign debt, leaving eurozone nations on the hook for well over half of the country's 320 billion euros in debt.

The ECB does as well -- a Greek exit would likely force it to seek new capital, requiring governments to put in more cash.

If Greece sets a precedent on how a country can leave the euro, those remaining will have to pay more to borrow which could prove a major drag on efforts to repairing government finances and boosting growth in Europe.

After a Grexit "issuing debt in the eurozone no longer means that it will always be the debt of a eurozone state," said Fabien Tripier, an economics professor at the University of Lille .

"There is a risk in the depreciation of the value of that debt."