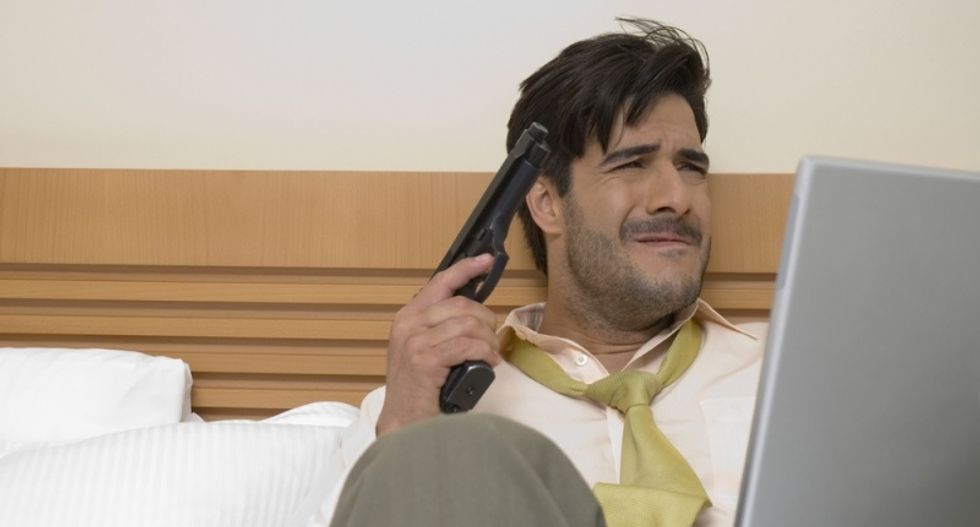 Conservatives have gone into hysterics in response to a coordinated effort by opponents of gun violence to wear something orange on Tuesday.

A coalition of national anti-gun violence advocacy groups -- including Moms Demand Action, Mayors Against Illegal Guns, and Everytown -- urged supporters to don orange on June 2 in solidarity with each other and in observance of National Gun Violence Awareness Day. And supporters -- including members of Congress, media celebrities, and lesser known citizens with social media accounts -- came out today in orange force, igniting fierce online debate about American gun policy.

Everytown's website says the "Wear Orange" campaign is an effort to "honor all those who have been killed -- and inspire action to stop the gun violence that takes too many lives in America."

Why orange in particular? According to Everytown, orange is "a color that symbolizes the value of human life. Hunters wear orange to alert other hunters that they're there -- as a way to take care of their own life and the lives of others." Everytown says the organization and allies are working to "[turn] orange into a symbol for the value of human life everywhere."

In a statement, the National Rifle Association describes the Wear Orange initiative as "pointless," as well as "spearheaded by the various heads of Michael Bloomberg’s anti-gun hydra." The NRA is apparently referencing the former New York mayor's celebrated philanthropy in the area of gun control advocacy.

Over at the Federalist Papers, right-wing blogger Jason W. Stevens, argues that he and fellow enthusiasts of unregulated firearms access are now under attack by "anti-gun tyrants." Stevens begins by disparaging the Wear Orange campaign as "the same PR strategy as a group of teenagers on school spirit day." Nevertheless, he warns, Everytown and its allies have a nefarious agenda.

"Hundreds of people who have never worn hunters’ gear in their lives," Stevens laments, are participating in today's demonstration. "None of them will be wearing actual hunting garb, of course," Stevens says, "just orange clothes of some other make and fashion (socks, bracelets, scarfs, t-shirts, etc.) as a means to imitate the hunter and protest guns at the same time. Smell the irony?"

The hashtag #WearOrange has earned itself no shortage of backers and detractors on Twitter. A few highlights are below, starting with the oppositional tweets -- including one from a Florida Republican and another from a Fox News reporter -- and ending with tweets from Wear Orange supporters.

Democrat "men" will still be #WearingOrange when thugs break into their homes to kill & rape their wives & kids. http://t.co/XtbhvxINDc
— Freedom Fan (@Freedom Fan) 1433263991.0

Steven Rosenblum is a Republican congressional candidate in Florida and a contributor at conservative media site Breitbart.

Notably, Dana Loesch is a conservative radio talk show host and a contributor to Fox News.

Only time I'm #WearingOrange is during hunting season. Guns save lives, despite what rich celebrities with armed security would tell you.
— David LaPell (@David LaPell) 1433266310.0

And now, tweets from backers of gun control policy who wore orange today:

Join me in #wearingorange today to show there’s more we can do to save lives & protect families from gun violence -Al http://t.co/mxcxy0nqVr
— Al Franken (@Al Franken) 1433261288.0