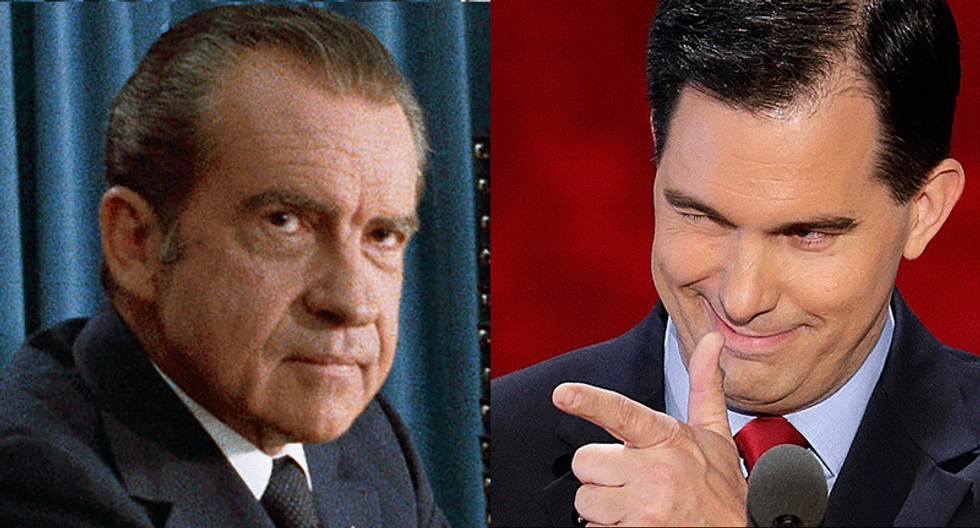 It is practically a blood oath in today’s Republican Party that government is evil, tax cuts are the cure for all economic distress (for millionaires, billionaires and corporations, anyway), and that nothing good comes from government interference in the private sector. From Barry Goldwater through Saint Ronald Reagan, right up to today’s clown car of GOP presidential candidates, the decades-long drumbeat of rhetoric against the intrusiveness of the feds has created a false memory that government can do no right. But it wasn’t always so. As with all false memories, this is a fabrication. What some describe as intrusion, others call regulation. Any government has the potential to overstep its bounds, but on the whole, the history of United States federal government regulation has been one of good, not evil.

Here are six examples of laws enacted by our government (mostly under Republican presidents!) that have regulated individuals and the private sector, and in doing so, have saved countless lives.

In 1956, the United States Congress, with Republican President Dwight D. Eisenhower, passed the Refrigerator Safety Act: “It shall be unlawful for any person to introduce or deliver for introduction into interstate commerce any household refrigerator manufactured on or after the date this section takes effect unless it is equipped with a device, enabling the door thereof to be opened from the inside, which conforms with standards prescribed pursuant to section 3.”

Here was the government forcing an entire industry to redesign its product. Certainly it cost refrigerator makers a little money, but the result was priceless to many parents: the safety of their children. Prior to 1956, most refrigerators were designed with latches that opened from the outside and were locked from the inside. Children playing hide-and-seek found themselves trapped in their ingenious hiding place, unable to get out, and unheard due to the rubber seal around the door. New refrigerator doors after 1956 had magnetic mechanisms, not locking latches, which opened from the inside by just pushing the door.

Did the law work? A study done in 1985 looked at children from 0-9 years old in California and found that between 1960 and 1981 deaths from refrigerator suffocation fell by half. The law is still relevant today, since many old fridges hang out in garages and dumps around the world, where children play and still, sadly, die.

We take for granted today that safety is one of the basic rights we have when we accept a job. This was not always the case. In 1970, when the United States had a total workforce of around 83 million people, 14,000 deaths happened on the job, or almost 40 deaths a day. Workplace fatalities were a fact of life when, under Republican President Richard Nixon, the Occupational Safety and Health Act was passed. The act mandated that industries have workplaces free from recognized hazards. It set minimum safety standards, and provided training to ensure compliance with the law.

The result was startling. From 1980-1989, workplace deaths dropped to around 17 a day, and in 2009 fell further to about 12 a day (with a workforce double the size of 1970). While no comfort to those 12 a day who still lose their lives, thousands of families have been spared the grief and loss they might otherwise have suffered. The reduction in fatalities has been achieved across the employment spectrum, from mining and manufacturing to construction and service sector jobs.

Prior to 1970, the leading cause of death among children under the age of five years old was unintentional poisoning caused by the consumption of prescription medicines, over-the-counter medicines such as aspirin, and other common household items. There were, on average, about 500 poison deaths a year in children under 5. Again with President Nixon, the Congress passed the Poison Prevention Packaging Act of 1970. The law did a very simple thing. It required that prescription drugs, OTC medicines and hazardous household products use child-resistant packaging. Just three years before, Henri Breault, a Canadian pediatrician, had invented a child-proof container that required the user to press down on the cap and simultaneously turn it in order to open the container. Prodded by the new law, American manufacturers adopted this container, and variations of it. The result? The death rate went down 45% from what would have been projected prior to the PPPA.

Traffic accidents are the leading cause of deaths for Americans between the ages of 5 and 32. Every 12 minutes in the United States, a traffic accident ends someone’s life. Today most states have some form of mandatory seat belt legislation. Research has shown that in a serious traffic accident, passengers wearing seatbelts reduce their fatality risk by up to 50%. Seatbelts save lives. But before 1968, American car manufacturers were not required to install seatbelts in their cars. Seatbelts were simply add-on features you could purchase for your vehicle.

This changed beginning in 1968, when the federal government, under Title 49 of the United States Code, Chapter 301, Motor Vehicle Safety Standard, made seatbelts a mandatory feature of every car. The government didn’t force passengers to wear their belts, and truthfully, most people found them annoying and uncomfortable at first and didn’t use them. But as the government slowly educated the public, through public service commercials and other communications, about the wisdom of buckling up, usage increased. Today the vast majority of car passengers, 85%, buckle up for safety. In the period between 1975 and 2001, almost 150,000 lives were saved as a result.

It has long been known that lead is a highly toxic metal that can cause brain damage, kidney and liver damage, cardiovascular problems, and death. For much of the 20th century, gasoline contained lead, which spewed out the exhaust pipe and into the air we breathe. House paint containing lead was routinely used, and children who munched on paint chips from walls and pipes often suffered lowered IQs, as well as memory and learning disabilities (not to mention seizures, coma and death). Despite the obvious problems, industries followed the familiar strategy of denial. Refusing to acknowledge that lead was the cause of widespread health issues, they instead blamed the children and other victims for being irresponsible. In 1965, a geochemist Clair Patterson conclusively established that lead was a clear and present danger, with levels in the blood of Americans 100 times the normal level.

In 1970, in the face of private industry objections, President Nixon (who, despite his crimes and misdemeanors, must be on the short list of greatest environmental presidents) signed the Clean Air Act of 1970, mandating that the lead levels in gasoline be reduced. In 1971, he signed the Lead-Based Paint Poisoning Prevention Act, which reduced and eventually eliminated lead in house paint. The results of these actions were unequivocal. A 2002 study showed lead levels in the blood of American children five years old and younger were lowered by more than 80%.  These children’s IQs were higher, by up to almost 5 points, than comparable kids in the 1970s.

Unfortunately, wild animals continue to suffer and die in great numbers since hunters still use lead ammunition, leaving toxic bullet-riddled carcasses in the wilderness. When predators consume the lead-tainted meat, they slowly die of lead poisoning. Lead poisoning is the biggest threat to the recovery of the California condor.

In the 1940s, there was a series of shocking fiery deaths of children that were the results of flammable clothing. The children were wearing long rayon piled cowboy chaps and brushed rayon sweaters, which came to be known as “torches” or “exploding sweaters." These horrific accidents led to the passage in 1953 (under Republican President Eisenhower) of the Flammable Fabrics Act. The law established, for the first time, flammability standards for children’s clothing and sleepwear, mattresses, carpets, and other fabrics. In 1967, under Democratic President Lyndon Johnson, the law was amended to include additional materials and furnishings. Fire-related incidents, though still one of the largest causes of accidental death in the United States, is on a downward trend. The FFA has removed the most highly flammable clothing from the retail market, and has undoubtedly saved the lives of many adults and children over the decades since its passage.