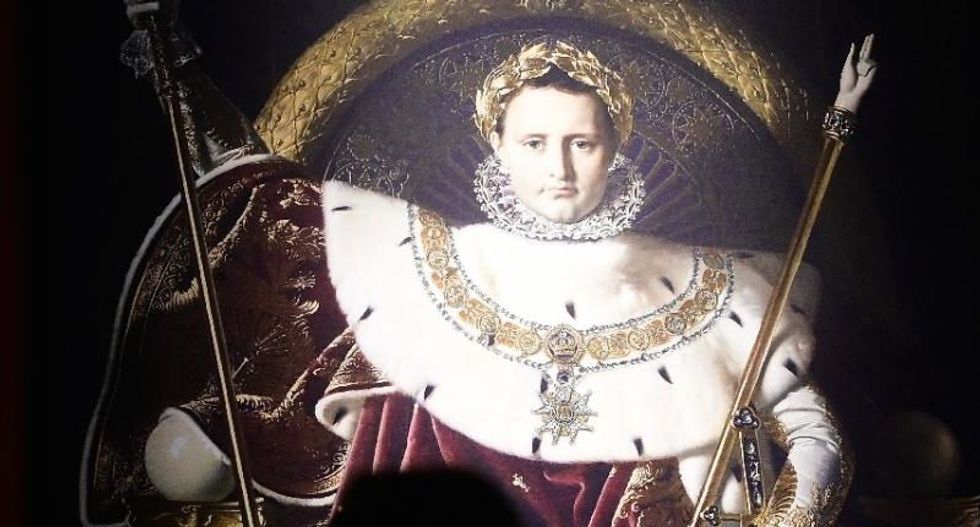 An empire as far as China, French will be spoken across the continent, and in the 20th century a global war between the great powers will be avoided; just some alternate histories imagined if Napoleon had won the Battle of Waterloo (AFP Photo/Emmanuel Dunand)

It is the evening of June 18, 1815 and an exultant Napoleon Bonaparte surveys the field after winning the Battle of Waterloo, planning his next conquest.

Within years his empire will stretch as far as China, French will be spoken across the continent, and in the 20th century a global war between the great powers will be avoided because of the stability his rule created.

These are some of the alternate histories that writers and experts have envisaged had Napoleon really been victorious in the battle 200 years ago, which actually ended in his humiliating defeat and exile at the hands of British and Prussian forces.

Historian Helmut Stubbe da Luz said that had Napoleon beaten generals Wellington and Bluecher on the plain of Waterloo, he would have carried on his march as far as northern Germany.

That scenario, however, should perhaps be taken with a pinch of salt, da Luz added, as the European monarchies of the time would not have let a defeat at Waterloo go unavenged.

But if one imagines that Bonaparte had eventually defeated his European enemies in the long-term, his ambitions afterwards would have been demonstrably larger, historians said.

"If Napoleon followed his original plans for 1810, he would have invaded Russia again and potentially extended his empire as far as China," Helmut Stubbe da Luz said.

An even more radical scenario was put forward in the 19th century by the French writer Louis Geoffroy. In his novel "Napoleon and the Conquest of the World, 1812-1832" he described how Napoleon was able to overrun China, turning it into a mere "Asian province".

The 1836 alternate history novel -- a literary genre that imagines parallel realities and includes classics such as Philip K. Dick's "The Man in the High Castle" about a United States beaten by Japan and Germany -- Geoffroy takes the story back to three years before Waterloo.

"I wrote the history of Napoleon from 1812 to 1832, from Moscow in flames to the universal monarchy and his death, 20 years of incessantly increasing glory which elevated him to an all-powerful level above whom there is only God," he wrote in the introduction to the novel.

But what would an all-powerful Napoleon have been like to live under?

For Stubbe da Luz, "Napoleon was a dictator but not a reactionary dictator like the Tsar of Russia."

Napoleonic rule across continental Europe, balanced by Britain's enduring maritime supremacy, would not necessarily have been that bad for the world, he said.

"The dictatorship that Napoleon exported to the countries under his domination was a regression compared to the progress of the French Revolution, but it wasn't bad for his new subjects in Germany, Holland, Italy and Spain," he said.

He cited the "equality of rights for religious minorities and rural populations, the right to vote for men, a new judicial system and an expanded economic area".

Cautiously looking further into the future, the historian imagines a "continental Europe dominated by France" throughout the 19th century.

Had that happened Germany would not have become so strong during that period, he says.

"Germany would therefore probably not have been in a position to provoke a First and Second World War," he said.

But imagining parallel histories is risky business for historians.

"The causes of events are innumerable," said Raxhon, the Belgian historian, from the University of Liege.

He limited himself to scenarios directly linked to the fates of the main protagonists. For example, a defeated Duke of Wellington would no doubt have returned by sea to England via Ostend, because Wellington himself had "envisaged losing the battle", he said.

Novelists of course have freer rein. In his 1992 best-seller "Fatherland", British writer Robert Harris imagines a Germany in 1964 that is preparing for a visit of the American president "Joseph Peter Kennedy" (JFK's father) to Adolf Hitler, the winner of World War II.

That of course is a war that according to some scenarios would not have happened... if Napoleon had won at Waterloo.