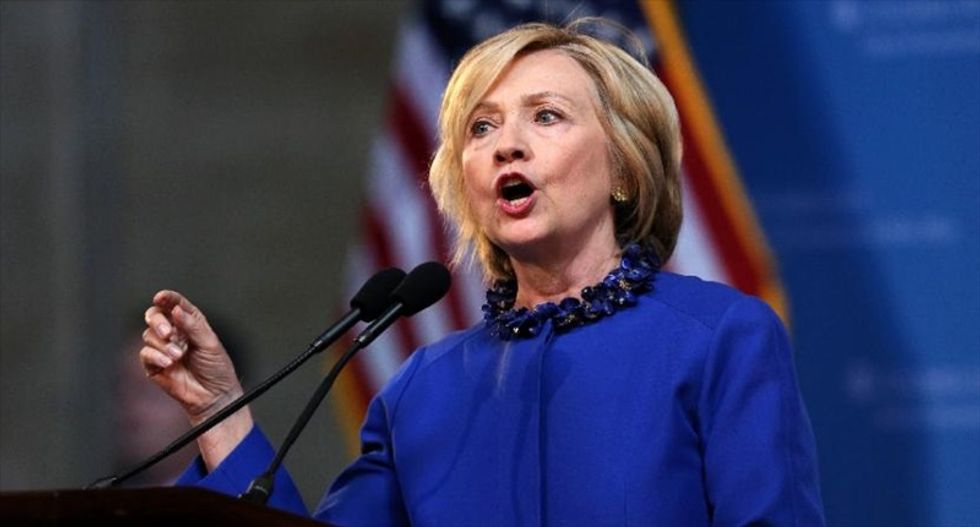 Setting a tone that had not previously been seen in her campaign for the Democratic nomination, Clinton lambasted former Texas governor Rick Perry – who announced his bid for the White House in Dallas earlier in the day – for signing what is widely viewed as the nation’s most restrictive voter ID law.

Other likely GOP contenders did not escape her ire. “Governor Perry is hardly alone in his crusade against voting rights,” she said, calling out Florida’s Jeb Bush, New Jersey’s Chris Christie and Wisconsin’s Scott Walker before turning to the US supreme court.

It struck down a key anti-discrimination provision of the 1965 Voting Rights Act in 2013. “We need a supreme court that cares more about the right to vote of a person than the right to buy an election of a corporation,” she said.

Clinton called for nationwide automatic voter registration for young people when they turn 18, unless they opt out, and a standard of at least 20 days of early voting including at weekends and evenings.

“Today Republicans are systematically and deliberately trying to stop millions of Americans from voting. What part of democracy are they afraid of?” she said. “What is happening is a sweeping effort to disempower and disenfranchise people of colour, poor people and young people from one end of our country to the other.”

Voting rights has long been an issue about which Clinton has been passionate. In 1972, as a law student, she spent several months travelling around south Texas trying to boost registration among Hispanic people.

Clinton spoke after receiving the Barbara Jordan Leadership Award, named in honour of the late civil rights leader, during a ceremony in the basketball arena at Houston’s historically black Texas Southern University. Her comments were well-received with the thousand-strong crowd, who afforded her a half-dozen standing ovations.

“Forty years after Barbara Jordan fought to extend the voting rights act, its heart has been ripped out and I wish we could hear her speak up for the student who has to wait hours for his or her right to vote, for the grandmother who’s turned away from the polls because her driver’s license expired, for the father who’s done his time and paid his debt to society but still hasn’t gotten his rights back,” she said.

In Houston on the second day of a two-day fundraising tour in the Lone Star State, she singled out laws in North Carolina and Texas as especially egregious. “If you want to vote in this state you can use a concealed weapon permit as a valid form of identification, but a valid student ID isn’t good enough,” she said.

“Many of the worst offenses against the right to vote actually happen below the radar, like when authorities shift poll locations and election dates, or scrap language assistance for non-English-speaking citizens.”

Several states have introduced restrictive voter ID laws in recent years. Texas’ requires one of seven forms of current or recently-expired photo ID to be shown at the polls. It has been the subject of state and federal litigation .

Texas Democrats and watchdog groups have detailed numerous examples of would-be voters disenfranchised by the law. “Texas by far is the breeding ground for discrimination in voting practices. They lead the way when it comes to voter suppression,” said Gerry Hebert, executive director and director of litigation at the Campaign Legal Center, a Washington-based nonprofit.

In November’s gubernatorial election, he said, “a number of people tried to go and vote but were turned away because of a lack of ID. But nobody keeps statistics on that.”

Reliable figures are hard to come by, Hebert said, in part because it is impossible to know how many people did not bother to turn up at the polls and risk the embarrassment of being turned away.

Officials in the heavily Republican state said in 2011 that at least 500,000 registered voters would not have the right identification to cast ballots in future elections. Politicians in favour of the law said they enacted it to ensure the integrity of elections, though there is scant evidence that voter fraud is a problematic issue.

A federal judge in Corpus Christi last year put the figure at more than 600,000 and said the law was an “unconstitutional poll tax” with an unfair effect on minorities.

Activists say that Hispanic, African American and poor people – traditionally strong sources of Democrat votes – are disproportionately affected by the regulations because they are the least likely groups to have photo ID, or be able to make potentially arduous and expensive trips to get it.

While Texas is solidly Republican, some Democrats believe that shifting demographics can turn it into a battleground state within a few years. Transforming Texas into a blue state would make a GOP presidential election victory almost impossible thanks to its 38 electoral college votes. But that would require a high turnout among the growing Hispanic population.

Those who try to apply for acceptable ID can be confounded by red tape .

In April the CLC released a video focusing on three Texans which illustrated that it can be extraordinarily difficult to get credentials, even with the help of a lawyer. “My state ID was expired so I called the DPS, department of public safety, and they told me that because my name was changed in 1964 [after his parents married] I could not get an ID. Ever since 1964 I have had this name and there’s been no problem until this DPS ID thing came up,” said one of the case studies, Anthony Settles.

Since he could not find a name change certificate, one desperate option he considered was legally changing his name again, which was not certain to work and would cost him a filing fee of $247.

Across the street from the university, staff and customers at Fades and Braids barber shop said they had not been personally affected by the law but they would probably back Clinton in the election. “I would suppose so. It’s not because she’s a Democrat; Hillary, she has experience,” said Ken Giddins.

Opposite, Dia Martin, owner of the Midtown Grill, said that she too had no problem producing identification to vote and that she was a Clinton supporter. “She’s got my vote – she’s a female,” Martin said. “I think she’s following her husband’s tutelage. He understood [African American] rights, what we believe in and what we fight for and I think working with President Obama she has the experience and the knowledge of our community.”