Homophobes explain that marriage is to be sad and dutiful 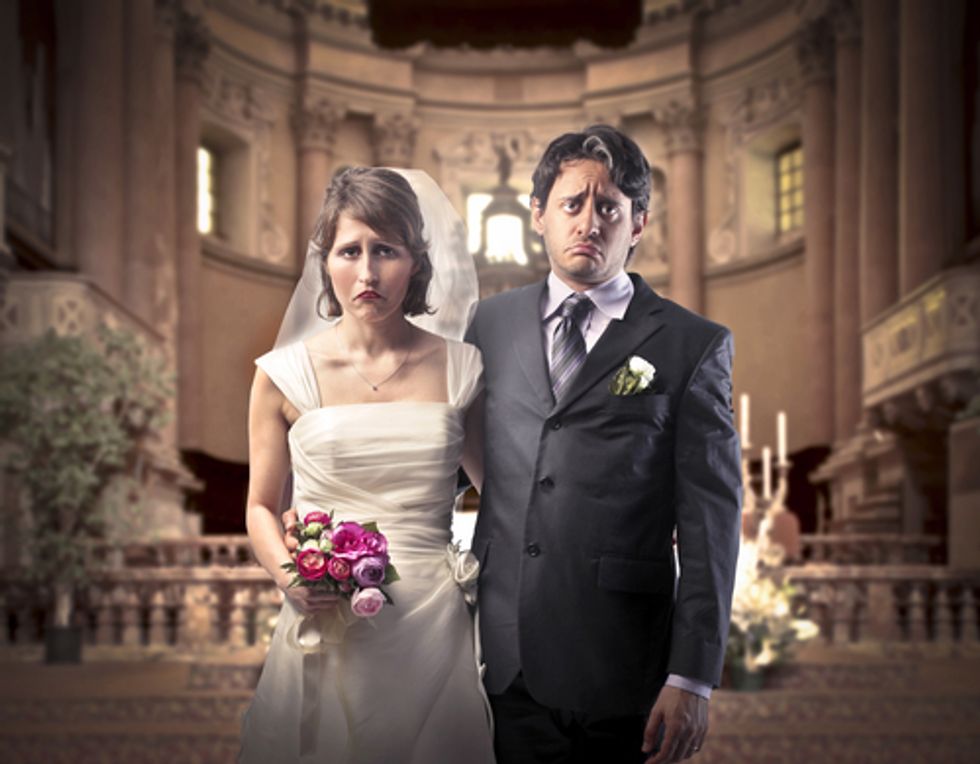 Right Wing Watch posted about Christian conservative activist Wayne Allyn Root---the same one who posited that Obama must have blackmailed Justice Roberts on the Obamacare decision---going on a radio show and positing that gay people are just going to be getting all divorced all the time. From their coverage:

“Marriage is the most difficult thing in the world,” he said, “I’m talking to you as someone who has been married 24 years, marriage is so difficult that if you do not go to church every Sunday and your whole life isn’t built on a bedrock faith in God and you don’t have kids and your whole life isn’t built around those kids and none of that’s in place and you’re married, the odds of you staying married are close to zero. Divorces will now triple. Gays will never stay married. They just bought themselves the biggest bunch of unhappiness and legal bills that they could ever imagine.”

I always found it facile to write off homobigots as all closeted gay people who are afraid to let their true desires out, as that is statistically impossible. But I do think you hear that theory a lot because there is a weird kind of resentment and jealousy that radiates off these people and it demands an explanation. I think these comments get to the root of it. They're not jealous that you get to have a bunch of gay sex. (Though I do think some do think that gay people have more and better sex, which creates some envy.) What I think is going on here is a little more complex, and Root's comments about what a miserable slog and hellpit of suffering marriage is gets at it.

Look, I believe Root when he says that not only is his marriage miserable but that he believes marriage is inherently miserable. The religious right argument is that men and women are deeply, fundamentally different---opposites, really---who will never really understand each other. They often talk about marriage as a tense transaction, where women exchange sexual access and family service for financial support and a promise of fidelity. It's a worldview where marriage is seen as a grim duty, instead of something you do to be happy.

This isn't even that hidden from the surface, as Ross Douthat's sour response to this decision shows. For a lot of homophobes, the logic appears to be something like this: I had to give up hope for happiness by saddling myself with a marriage to someone I don't really like much in order to fulfill my procreative duties. Who do you gays think you are, with all your talk of love and passion? You're starting to give other straight people the idea that they should marry for love? Piss on all of you. If I can't be happy, no one can.

Indeed, if you think marriage should be about duty and not love, and that it's meant to be a slog from which only death provides sweet relief, then you probably don't see the problem with bullying gay people into marrying people of the opposite sex and committing to a life of pleasureless sex and resentment. That may, in fact, sound like your life.

This kind of thinking was even in Justice Scalia's unhinged dissent in this case. In response to Justice Kennedy arguing that marriage allows people to "find other freedoms, such as expression, intimacy, and spirituality", Scalia cracked a take-my-wife-please joke. "Really? Who ever thought that intimacy and spirituality [whatever that means] were freedoms? And if intimacy is, one would think Freedom of Intimacy is abridged rather than expanded by marriage. Ask the nearest hippie." Hurk hurk, because people stop having sex when they get married, right? Thigh slap! Bitter laugh.

Considering that these are the same folks who think you should not have sex before marriage, one does wonder when sex happens, in their worldview. It appears the answer is "rarely, with the woman in particular being reluctant".

Needless to say, the impact of this decision on the divorce rate will be negligible. There's no reason to think that gay people think about marriage differently than straight people. The mentality Root is decrying---the belief that marriage should make you happy instead of being a miserable slog---is widespread amongst straight people. And it's actually associated with a lower divorce rate, because people hold out for partners that make them happy, making the commitment easier to stick with once it's made.

Also, and this is a small but relevant point, the numbers don't add up. Even if every gay couple ever married got divorced, it would just be a minor bit of statistical noise compared to all the straight people getting married and divorced. As the New York Times notes, the number of married same-sex couples in this country is less than 400,000. That's out of 60 million married couples overall. Even if every single same-sex couple in this country got married, that would make them let than 2 percent of married couples in this country.

I'm not saying this to minimize the issue of same-sex marriage. It's a critical issue and that is a lot of people! But it's worth noting that he's trying to scare people by making a claim---that gay couples will ratchet up the divorce rate---that wouldn't be possible even if his outrageous assumptions about how gay people live were true. More to the point, it tells you a lot about what's going on that Root blames a widespread phenomenon he disapproves of---marrying for love instead of duty---on a very small minority, a minority that is objectively too small to have that kind of impact on larger society. It really shows what's going on with the anti-gay movement. They have fairly broad objections about how we all live our lives, but they are afraid to level those accusations as straight people directly, because straight people are numerous and powerful and will laugh you out of the room if you deny us our right to marry for love. Gay people are the dumping ground for all these larger arguments these cowards are too afraid to lob at their fellow straight people. (As they should be, as these are bad arguments.)

Before he was elected mayor of New York City in 1993, Republican Rudy Giuliani was a federal prosecutor for the Southern District of New York — and he had a reputation for being tough, focused and aggressive. But now, ironically, Giuliani finds himself being investigated by the U.S. Department of Justice. His home and office in Manhattan were recently searched as part of a DOJ investigation of his Ukraine-related activities of the Trump era. And CNN's Marshall Cohen offers some insights on those search warrants in an article published on May 7.

Defense attorneys representing one of the Capitol rioters this week claimed that their client wasn't to blame for his actions because he'd been "radicalized" by Fox News.

CNN legal analyst Carrie Cordero on Friday explained to host Brianna Keilar that it was unlikely any jurors would buy into this so-called "Foxitis" defense of MAGA rioter Anthony Antonio.