Huckabee: Confederate flag-waving South Carolina can't be racist because it has an 'Indian' governor 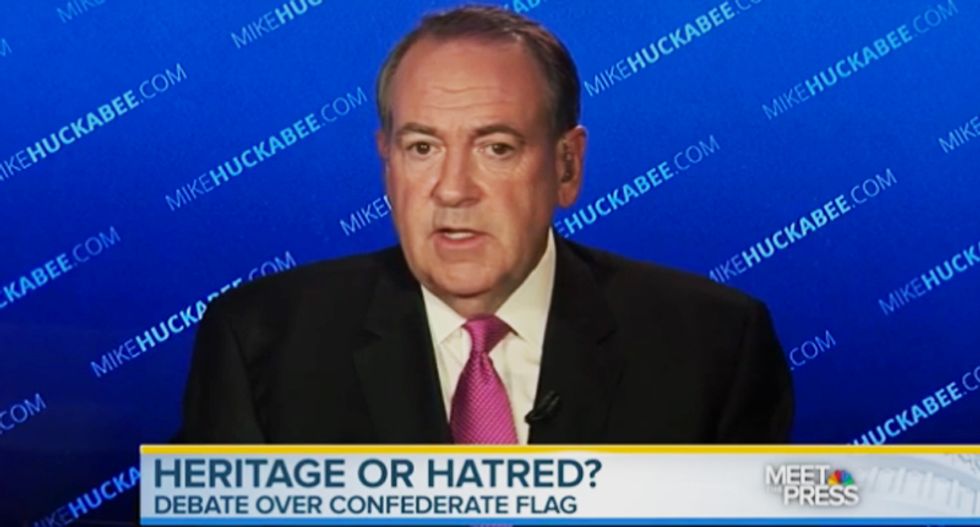 Appearing on Meet The Press, former Arkansas Governor Mike Huckabee refused to condemn the state of South Carolina for flying the Confederate flag, instead saying the state can't possibly be racist because they elected an 'Indian' governor.

Speaking with host Chuck Todd, the possible Republican presidential nominee continually avoided offering a personal opinion on the flag, failing to answer whether he would ever display one. Instead he turned the questions about flying the flag representing the Confederacy into a defense of the people of South Carolina.

"We're asking, 'Is South Carolina a racist state because of the flag on their capital grounds?'" Huckabee said. "Here's what I can tell you. As a frequent visitor to South Carolina, this is a state that largely white people elected a female governor of Indian descent and the first ever African-American senator from the South."

Huckabee went on to compare the diversity of South Carolina's lawmakers to liberal bastions such as New York and Massachusetts, before Todd attempted, once again, to turn the discussion back to the flag.

"Let me just ask you this personally," Todd queried. "Are you comfortable displaying the Confederate battle flag in public?"

Huckabee added that he didn't believe candidates for the presidency should concern themselves with the matter.

Failing to get an answer, Todd moved on.