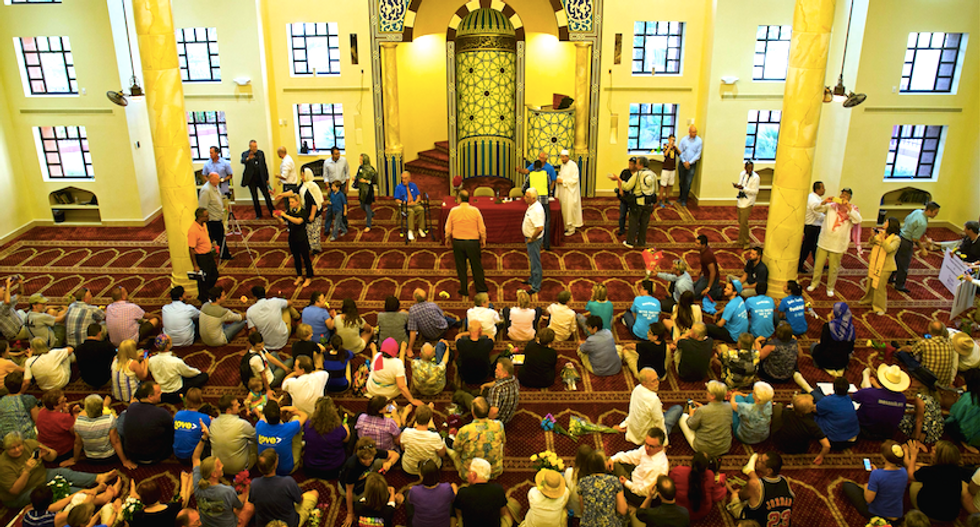 An Arizona mosque where hundreds gathered last week for an anti-Islam demonstration, with counterprotesters shouting "Go home, Nazis," was the site of a "love not hate" event on Monday to promote peace and inclusiveness, participants said.

The Islamic Community Center of Phoenix said it was hosting a gathering that includes a multi-faith prayer service and speakers to "show that when one of us is mistreated, our community responds with a message of Love and Not Hate."

"We ask that you bring a FLOWER as a symbol of love and care," the event organizers said on Facebook. "We are better together, and together we are strong."

Monday's event, organized by more than 20 groups, comes four days after an anti-Muslim event held outside the mosque drew more than 200 protesters, some armed, who berated Islam and its Prophet Mohammed.

The rally was held at the mosque in part because two Texas gunmen who opened fire outside an anti-Muslim event in Texas last month had worshipped there, said rally organizer Jon Ritzheimer, an Iraq war veteran.

As that event unfolded, demonstrators on both sides screamed obscenities at each other as police in riot gear separated the two groups.

On Monday evening, about 200 participants filed into the mosque, some carrying roses, tulips and daisies.

"There's been a lot of effort to divide the faith community and set us apart from one another and we want to demonstrate a strong message of togetherness," Reverend Erin Tamayo, executive director of Arizona Faith Network, which helped to organize the event, said. "I am praying we don't get any negative response."

Among other co-sponsors of Monday's were the Islamic Speakers Bureau of Arizona, Arizona Interfaith Movement and the Anti-Defamation League, according to the Facebook posting.

(Reporting by Deanna Dent in Phoenix; Writing and additional reporting by Eric M. Johnson in Seattle; Editing by Leslie Adler)