'I got nothin' for you': An emotional Jon Stewart puts the jokes aside to discuss racism in America 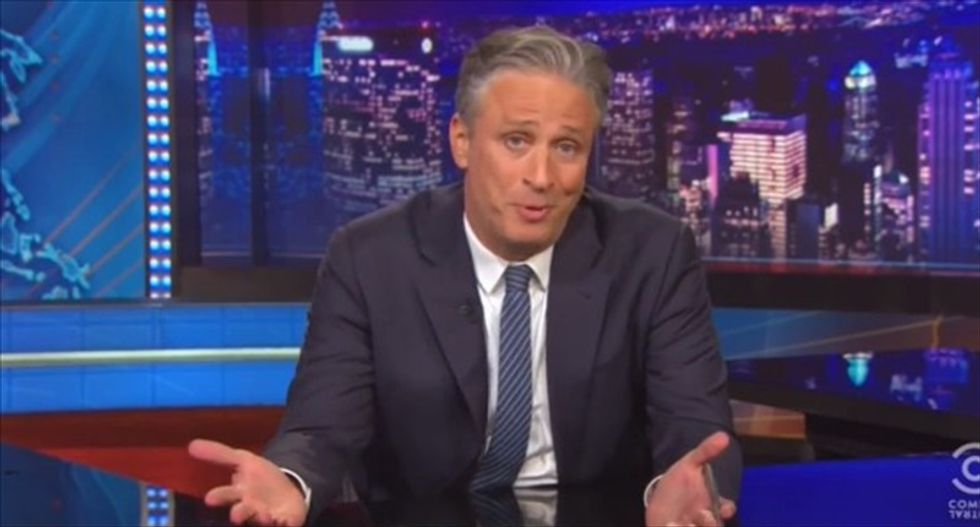 Once again, Jon Stewart found himself unable to wisecrack to open another Daily Show episode, as he addressed Wednesday night's terrorist attack at a historic black church in Charleston.

"I didn't do my job today. So I apologize," Stewart told his audience on Thursday. "I got nothin' for you in terms of jokes and sounds, because of what happened in South Carolina. And maybe if I wasn't near the end of the run, or this wasn't such a common occurrence, maybe I could've pulled out of the spiral. But I didn't. And so, I honestly have nothing, other than just sadness."

Rather than delve into the politics surrounding the shooting inside the Emanuel African Methodist Episcopal Church that left nine people dead, Stewart said, he was stunned by the "disparity of response" surrounding the incident. Had the suspect, 21-year-old Dylann Roof, been an "Islamic terrorist," the US would have invaded his home country, filled the sky with drones or torture people in the name of safety.

Instead, he argued, people were shrugging their shoulder and saying, "What are you gonna do? Crazy is as crazy is, right?," as the coverage devolved into "the nuanced language of lack of effort."

"This wasn't a tornado. This was a racist," Stewart said of Roof. "This was a guy with a Rhodesia badge on his sweater. I hate to even use this pun, but this one is black and white. There's no nuance here."

He also tore into what he described as the prejudice steeped into the culture, noting that several roads in South Carolina are named after Confederate generals, who fought a war to keep black people from being able to use them.

"That's insanity. That's racial wallpaper," Stewart said. "You can't allow that. Nine people were shot in a black church by a white guy who hated them, who wanted to start some sort of civil war. The Confederate flag flies over South Carolina, and the roads are named for Confederate generals. And the white guy's the one who feels like his country's being taken away from him."