'It was all worth fighting for': Stonewall revels in US gay marriage victory 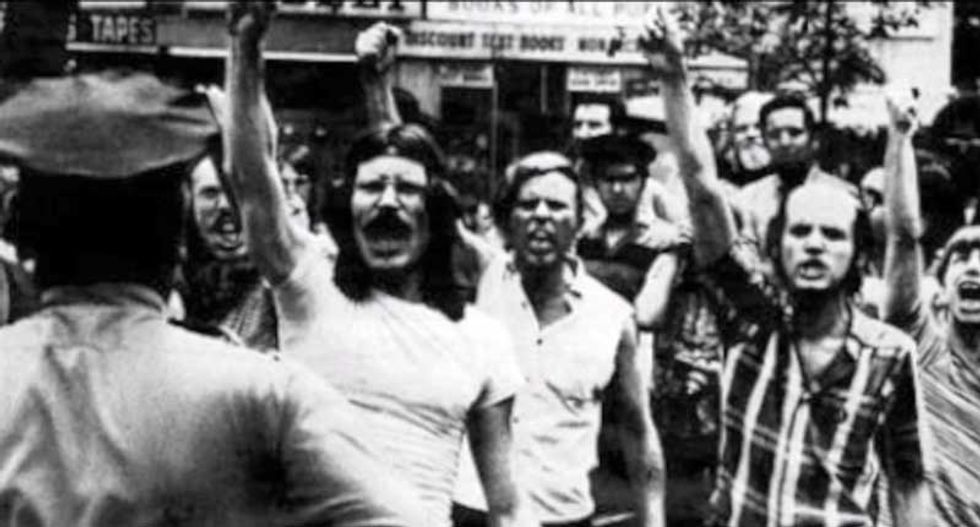 The birthplace of the American gay rights movement was in high spirits, as the Manhattan bar’s patrons celebrated the ruling and remembered the 1969 riots

“A toast!” It is just after 11am at the Stonewall Inn, the iconic bar in Manhattan’s West Village, and hundreds of people are shouting, laughing, cheering and whooping.

Stonewall is a near-sacred emblem for the gay rights movement in America. Forty-six years ago, almost to the day, a police raid here against public homosexuality – illegal in New York at the time – proved to be the last straw for a community all too used to oppression.

This was their stand. Thousands took to the streets for days of unrest. Scores were arrested. Stonewall galvanised the community. From here, the movement was truly born.

On Friday, America’s highest court ruled in favour of gay marriage in every state . The arc of the moral universe, the rainbow arc which began here almost five decades ago had, finally, curved toward justice.

With unbridled joy, the community celebrated the longed-for news. By noon, everyone was dancing. Love Generation played. Later, the streets were to be closed for a parade. This weekend is New York Pride, the festival of gay rights founded by members of the same movement that took their stand in 1969.

Stacy Lentz is one of Stonewall’s owners. “People are going to party in the streets,” she told the Guardian. “It’s an incredible day for us and for LGBT people around the world. America finally has marriage equality!”

Lentz said she cried “tears of joy” when she heard the news.

“It lifts a stigma when the federal government recognises you as a full citizen,” she said. “I was elated.”

Karen Schmiege had come to New York for Pride from Albuquerque, New Mexico. Two years ago she and her partner Patricia – who had been together for a quarter of a century – were the first couple to be married under the state’s new marriage equality laws. She never thought this day would come.

“It’s the gift of freedom,” she told the Guardian, grinning from ear to ear. “It was all worth fighting for.”

In the supreme court, one of the votes against was cast by Antonin Scalia, known as a rightwing lead weight on the scales of American justice. In Stonewall, his name was mud.

When the TVs – playing CNN – showed extracts from his dissent, they were met with deafening boos. “A toast,” a man said again, and the packed crowd raised their drinks, whooping and shouting and hanging on his every word, clearing a circle in the crowded bar.

The man paused for quiet.

The crowd roared back, and laughed, and lifted their eyes, and poured back their drinks, and kissed each other in joy, and danced and danced.

Watch a short documentary on the Stonewall uprising below: