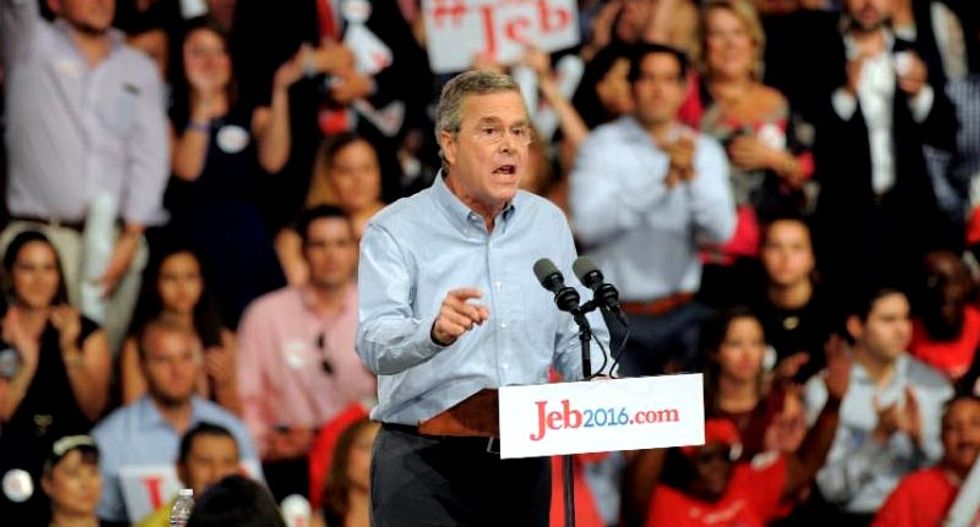 Jeb Bush jumped headlong into the presidential race, insisting "America deserves better" after eight years of Barack Obama, as the Republican seeks to win over voters skeptical of his political pedigree.

Following a six-month pre-candidacy exploration, Bush made his formal announcement at Miami Dade College, a diverse university chosen to signal that he aims to run an inclusive 2016 campaign.

"I have decided. I am a candidate for president of the United States," he said.

While he is the son and brother of two former presidents, Bush highlighted his own political vision and his two terms as governor of Florida.

"We made Florida number one in job creation and number one in small business creation," Bush said, boasting that he slashed taxes by $19 billion.

"I know we can fix this. Because I've done it."

Bush also stressed he would campaign everywhere and face the issues, rather than rely on his record from a decade ago and his family name as he seeks the nomination now sought by 11 Republicans.

He also stressed that as president he would take Washington "out of the business of causing problems."

The phrasing marked a jab at the four US senators in the race -- Ted Cruz, Rand Paul, Lindsey Graham and fellow Florida conservative Marco Rubio -- and suggested Americans should seek an outsider with executive experience.

Bush, 62, has been running a de facto campaign for months, raising millions of dollars and boosting his international profile with a trip last week to Europe.

Following his speech in Miami, he will set about trying to prove that, although he comes from a political dynasty, he is his own man.

While he highlighted his own record, he knocked the Obama administration for what he called the "phone-it-in foreign policy, the Obama-Clinton-Kerry team (that) is leaving a legacy of crises uncontained, violence unopposed, enemies unnamed, friends undefended, and alliances unraveling."

"You and I know that America deserves better," he said.

Hillary Clinton is the frontrunner on the Democratic side, with no current close competition.

Nationally, Bush is bunched at the top of most Republican polls, but he is not the dominant figure many had expected.

He finished a dispiriting seventh last month in an Iowa poll, but dismisses his struggles to break free of the pack.

He waded into a quagmire last month when he repeatedly stumbled over whether he would have authorized an invasion of Iraq.

The hiccups highlighted what will likely be one of the candidate's main challenges: overcoming the legacy of his brother George W. Bush, his unpopular Iraq policy and a second term that ended economic turmoil.

Some voters are less critical of the family name.

"To me the last name brings a lot of respect," Carlos Musivay, an entrepreneur at Bush's launch, told AFP.

"It also brings the challenges of his brother, but we have to look at Jeb for Jeb," he added. "He's his own person. When he was governor, it wasn't George W. running Florida."

Grassroots conservatives have expressed skepticism, saying Bush has not put forward a compelling message since leaving the governorship eight years ago.

His support for comprehensive immigration reform places him to the left of virtually all Republican candidates on the issue, and his backing of national education standards is loathed by the far-right.

With many conservative primary voters demanding ideological purity, Bush has a tricky path to the nomination.

He will seek to avoid getting tarred with the dreaded "moderate" label when campaigning before conservatives, but Bush was clearly casting a wide net in his rally, which held a decidedly Latin flavor.

Several speakers broke into Spanish, including Bush himself, who is fluent in the language.

While it was a potent lure for Hispanic voters, Bush's speech was interrupted by immigration reform protesters. But he was prepared with a retort.

"The next president of the United States will pass meaningful immigration reform," he boomed.