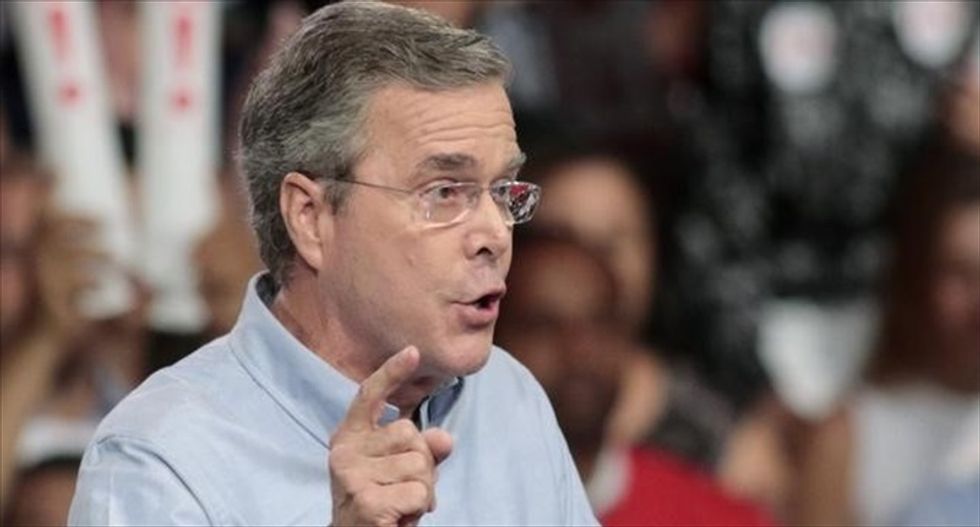 Former Florida Governor Jeb Bush formally announces his campaign for the 2016 Republican presidential nomination during a kickoff rally in Miami, Florida on June 15, 2015. Photo by Joe Skipper for Reuters.

In his first official day on the presidential campaign trail on Tuesday, Republican Jeb Bush, a Catholic, had sharp words on Pope Francis’ decision to leap into the climate change debate, saying the pontiff should steer clear of political issues.

Bush, at a town hall event in New Hampshire a day after formally announcing his candidacy for the 2016 presidential election, said he was eager to read an encyclical the Vatican is set to release Thursday on climate change, but will take it with a grain of salt, even as he called Francis an extraordinary leader.

"I hope I’m not going to get castigated for saying this by my priest back home,” Bush said. “But I don’t get my economic policy from my bishops or my cardinals or my pope."

Bush, a former Florida governor who converted to Catholicism 25 years ago, said religion "ought to be about making us better as people and less about things that end up getting into the political realm."

Francis, according to a leaked draft version of his encyclical, or a letter to bishops, says the world could see destruction of entire ecosystems this century without urgent action on climate change.

In the Italian version of the 192-page document, posted on Monday by the weekly magazine l'Espresso, the pope again backs scientists who say global warming is mostly man-made and says that developed countries have a particular responsibility to stem a trend that will hurt the poor the most.

In an appearance in New Hampshire last month, Bush said it was arrogant for people to insist that science on climate change is clear.

In Derry on Tuesday, Bush said he did not think the science on climate change was "complete."

But Vice President Joseph Biden, a practicing Catholic, invoked the pope's encyclical at clean energy conference at the White House on Tuesday. "Usually encyclicals are only issued on what the church thinks are incredibly important initiatives," Biden said.

Bush is not the only Republican presidential candidate to differ publicly with Pope Francis.

In January, after the pope said there was no need to procreate "like rabbits" in order to be a faithful Catholic, Rick Santorum, a former U.S. senator and also a Catholic who announced his bid for the Republican nomination in May, said that it was "sometimes very difficult to listen to the pope and some of the things he says off the cuff."

More than 70 percent of U.S. Catholics believe the planet is getting warmer, though only 47 percent attribute that warming to human causes, according to the Pew Research Center. The views of Catholics on the issue are similar to those of Americans overall.