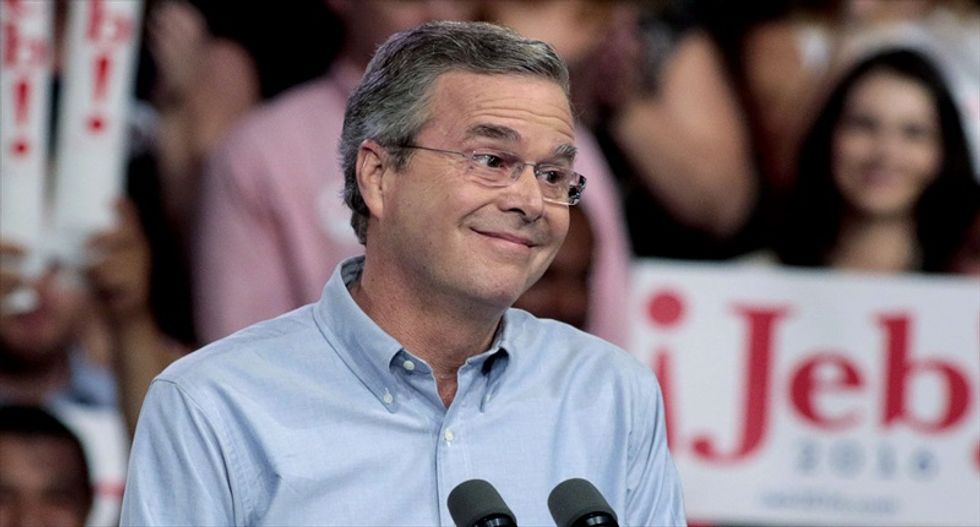 Presidential candidate and former Florida Governor Jeb Bush pauses as he formally announces his campaign for the 2016 Republican presidential nomination during a kickoff rally in Miami, Florida June 15, 2015. Photo by Joe Skipper for Reuters.

Former Florida governor Jeb Bush vowed to fix a dysfunctional Washington as he began his U.S. presidential bid on Monday with an attempt to move out of the shadow of the White House legacies left by his father and brother.

Bush, 62, is seeking to be seen as his own man and break out of a crowded field for the Republican presidential nomination to run in the November 2016 election.

In a speech in Miami to announce his candidacy, he presented himself as an anti-Washington figure with a can-do spirit.

“We will take Washington – the static capital of this dynamic country – out of the business of causing problems," he said. "I know we can fix this. Because I’ve done it.”

Bush made his announcement at Miami-Dade College, a school whose multicultural student population was chosen to emphasize Bush's commitment to trying to expand the appeal of the white-dominated Republican Party.

“We don’t need another president who merely holds the top spot among the pampered elites of Washington. We need a president willing to challenge and disrupt the whole culture in our nation’s capital, he said.

He was joined by his mother Barbara Bush, 90, at the event. Former presidents George H.W. Bush, his father, and George W. Bush, his brother, did not attend.

Both men left office with low approval ratings. The legacy of Jeb's brother is particularly difficult given his 2003 invasion of Iraq and the financial crisis that erupted toward the end of his time in office.

Distancing himself from the pair, without being disloyal to his family, will be tricky for the younger Bush. His campaign logo "Jeb!" avoids using the family surname.

“I think the biggest hurdle is he is going to have to sell himself as his own person, not his brother and not his father,”

said Fran Hancock, 64, from Palm Beach, a supporter at the event on Monday.

Bush held an early lead in opinion polls of Republican voters when he first began talking about a White House run six months ago, but that has now dissipated. He is essentially tied for the lead with a host of challengers.

Failure to deal with the Bush family legacy has already caused problems for Jeb, who fumbled a response last month to a question about whether he would have invaded Iraq.

On Monday, Bush criticized former secretary of state Hillary Clinton, the front-runner for the Democratic nomination in 2016.

“With their phone-it-in foreign policy, the Obama-Clinton-Kerry team is leaving a legacy of crises uncontained, violence unopposed, enemies unnamed, friends undefended, and alliances unraveling," he said.

Democrats made sure to remind voters of the George W. Bush's record.

"We already know what to expect from a Bush presidency, because we’ve seen it before. Jeb Bush supported his brother’s disastrous economic and foreign policies that made us weaker at home and abroad," said Rep. Debbie Wasserman Schultz, head of the Democratic National Committee.