Jon Stewart shreds Scalia's dissent: He had no problem telling voters to 'f*ck off' in Citizens United 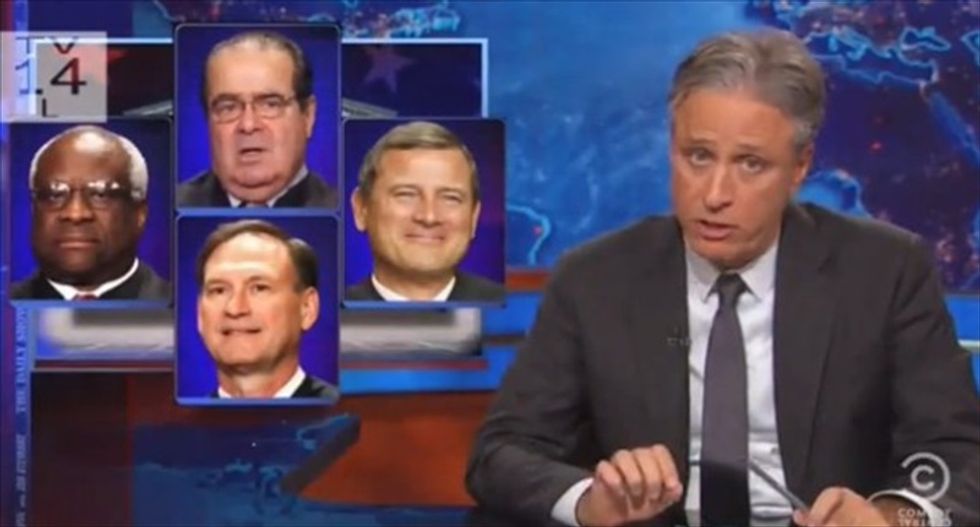 "I think we found Scalia's tell," Stewart said. "The crankiness of Scalia's insults runs inverse to his intellectual consistency."

While Scalia fretted in his dissenting opinion that the "patrician" court was acting out of turn in striking down marriage equality bans, Stewart explained, he "had no problem telling people to f*ck off" in the Citizens United case that paved the way for massive amounts of money to flood the political process.

"Or, if the voters want a Voting Rights Act, and kept electing Congresses that kept renewing its anti-racial bias provisions by super-majority votes again and again," Stewart added. "Then, not only did Scalia overturn it, he had no problem dismissing all those elected representatives' motives for passing racial justice legislation in the first place."

Unfortunately for the "modern-day Diogenes," however, he was on the losing end of both the marriage equality issue and the Affordable Care Act decision, and was forced to complain about legal "jiggery-pokery" and "applesauce."

"You kiss your mother with that mouth? 'Jiggery-pokery'? 'Applesauce'?" Stewart asked. "Sir. Let us not say things we can never take back. Or even understand."