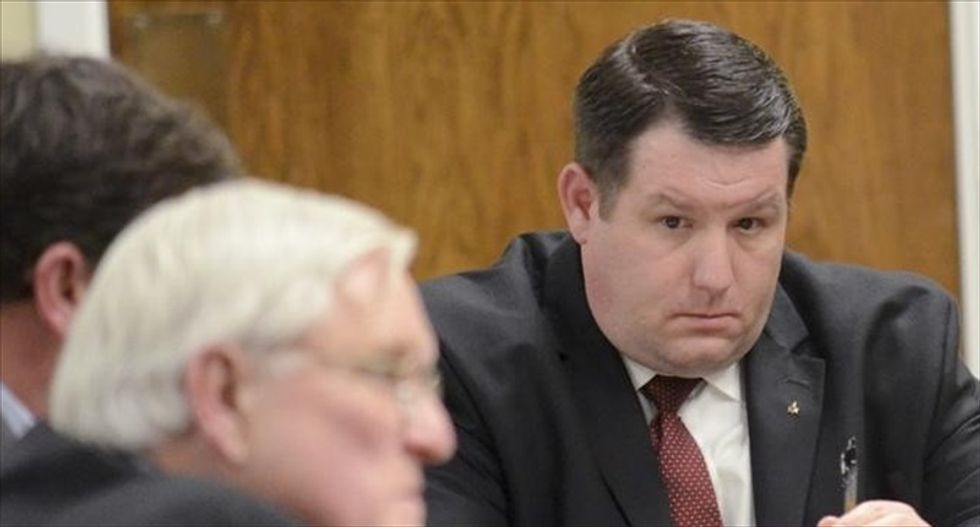 Former Eutawville Police Chief Richard Combs sits with lawyers on the second day of testimony in his trial for the murder of Bernard Bailey in Orangeburg, South Carolina on Jan. 8, 2015. REUTERS/The Times and Democrat/Larry Hardy/Pool

A judge declared a mistrial on Friday night in the re-trial of a former South Carolina police chief accused of murder after a jury failed to reach a verdict despite seven hours of deliberation, a defense attorney told Reuters.

A jury in the week-long trial heard many of the same witnesses who testified in Richard Combs' first trial, held in Orangeburg, near the tiny town of Eutawville where he was police chief.

It's up to prosecutor David Pascoe to determine whether Combs will be tried again, defense attorney Wally Fayssoux told Reuters by phone on Friday night.

Pascoe could not be reached immediately for comment. "This is a situation where if we try this case 10 times, at the end of the trial, it's a difficult set of facts," Fayssoux said. "Both side are disappointed that we don't have finality."

A jury in January failed to reach a verdict in the first murder case against Combs, who was charged with killing 54-year-old Bernard Bailey in 2011 after they argued over a traffic ticket issued to Bailey's daughter.

Those decisions, along with separate police killings of minorities across the country over the past year, sparked waves of protest against police violence and renewed a civil rights movement under the banner of "Black Lives Matter." In one such case, former North Charleston, South Carolina officer Michael Slager was indicted earlier this month for murdering 50-year-old Walter Scott, who ran after a traffic stop. The shooting was captured on a bystander's video.

The day of the Eutawville shooting, Bailey, a former prison guard, came to the town hall to speak with then-police chief Combs about a traffic ticket issued to his daughter at an earlier date, according to prosecutors.

Prosecutors said instead, Combs tried to serve Bailey with an arrest warrant for obstructing justice during his daughter's stop, where Bailey was present.

Combs tried to prevent Bailey from driving away after their argument, firing three shots that struck Bailey in the chest, abdomen and head, prosecutors said. Pascoe argued that Combs shot out of malice.

Fayssoux argued that Combs feared he would be run over and was "in reasonable fear for his life," a legal justification for a police officer to use deadly force.